Green Hornet (and Kato and the Black Beauty) 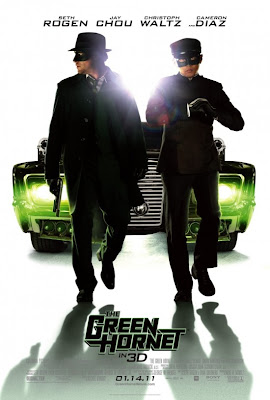 5 second review: This is the funnest movie I've seen in years.

30 second review: A rich, useless guy, a Chinese wundermann, the world's most awesome car, and an extremely competent villain with an inferiority complex. Thus a superhero team is born.

In depth: The Green Hornet fun, funny, and manages to hit all its plot points without bogging down or becoming brooding. Everybody in the theater (ranging from children through adult comic book geeks) was really enjoying it.

For those of you who have never heard of the radio serial, the various comic books, or the TV show, the Green Hornet is a superhero. The general back story for all the Green Hornet incarnations is that Britt Reid, a newspaper publisher, takes on the persona of the Green Hornet in order to fight crime. What distinguishes GH from all the other mystery men and heroes is that he pretends to be a villain. A big part of the story is Kato. Kato has evolved. In the radio serial he was just Reid's driver. Since at least the 60's, when Bruce Lee played Kato on the TV show, Kato has been an amazing fighter.

In this modern adaptation, Britt Reid is beyond being a ne'er-do-well. He is a hedonistic, moral tragedy. In other words, he is living the life most guys dream of. He has more money than he can ever use, has absolutely no responsibilities (his father runs the paper), and dozens of beautiful women are willing to sleep with him whenever he wants. Then his dad dies.

What follows isn't the typical creation of a hero theme. We don't get the troubled cry for vengeance, the brooding troubled transformation into a driven man. Nope. We get Reid and Kato bonding over what an @sshole Reed's father was and mutually deciding to go do some childish and stupid vandalism. They trip over a mugging and stumble into becoming heroes. Meanwhile, the TV news vilifies them for the vandalism.

Reid decides to go with it. He talks Kato into it. Reid uses his paper to play up GH and gives Kato a blank check. Kato builds the Black Beauty, a car which makes the batmobile look wimpy, and provides the muscle and fighting skills when it comes time to fight bad guys.

What makes the movie different is that for the vast majority of the film Britt Reid is an immature idiot. He became a hero out a childish impulse. He treats everyone and everything around him as a toy. He uses the the newspaper he inherited to make the GH famous. He throws money at Kato so he can create all the GH's gear. He gapes in amazement at all the wonderful toys Kato makes for them and denigrates the fact that all the serious fighting is done by Kato. In fact, his immaturity starts to make it all fall apart.

Then, something happens in which reality slaps Reid in the face. He steps up and makes a mature decision not having to do with the GH. That action leads to an extended, well-done battle over the last half hour of the film.

It's different from most hero movies and that's what made it so much fun to watch. I rate it a 4 out of 5.

The only critique? It shouldn't have been in 3D. If you can avoid seeing it with the stupid glasses on, do so. It added nothing but annoyance.
Author: Ken Lammers on 1/15/2011
Email ThisBlogThis!Share to TwitterShare to FacebookShare to Pinterest

Worth seeing but I would seriously agree on the 3D. It made my head hurt and it really added nothing to the movie. In fact, I think they went out of their way to make it annoying.