Reworking the Circuits
Will The General Assembly Make a Change? 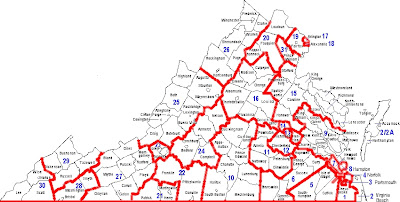 However, there is a bill being introduced into the General Assembly which proposes that the circuits be changed to look like this: 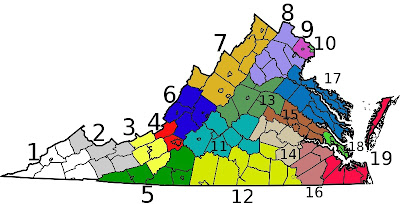 In principal, I agree with one of the major changes being made here: the elimination of single polity circuits. In fact, I think there is basically no excuse for the new 9th and 10th circuits. They should be merged and also have a couple counties from the proposed 8th added in. I realize that this means some judges from those jurisdictions would have to occasionally drive to another county, but that's why it's called a circuit - it's meant to be ridden. While I'm pointing out circuits which are too small, the 4th needs to take a couple counties in as well.

The biggest failure of a circuit is if you make it too large. The old circuits failed this test in the 27th, 25th, 10th, the 16th, and probably the 15th. The new one will fail this in the 7th, 12th, 17th, and 19th. The main concern here is the travel of the judges. A judge should not have to start out in his county at one end of the circuit and have to drive over 90 minutes (max) to get to the court in the county at the far end of the circuit.

In fact, it would be prudent to set a rule the circuits must have no fewer than three polities and no more than five. As well, if one polity is surrounded by another that should only count as one polity. This would get rid of the single polity circuits as well as keeping a group of more rural counties (where judges actually ride their circuits) from becoming too large.

There are some strange things in the new proposal. For the life of me, I cannot figure out why Henrico, Richmond, and Chesterfield are not being made into a circuit. They compose the Greater Richmond Area and should be together. As well, I don't understand why Colonial Heights, Petersburg, and Hopewell aren't in the same circuit. Splitting three cities so close that they are called "the Tri-Cities" doesn't make much sense. I don't understand why the proposed 7th, 12th, 17th, and 19th aren't each split in half into smaller, easier traveled and easier managed circuits.

I'm also confused as to what's going on in Southwestern Virginia. There's really no reason to mess with the current 30th or 29th circuits. They both are compact enough in size to be manageable. There is no reason to expand or alter them except to do it in order to prove it can be done. I think part of this may be an attempt to decrease the size of the current 27th circuit and the 27th does appear to be too large a circuit. However, the solution to that would be to have the 28th and the 23d, both of which are too small, absorb a couple counties each.

The proposed circuits for Southwest Virginia look a lot like they were drawn by Sykes-Picot. Someone just looked at the map and tried to draw as straight lines as were possible taking into account county lines. It doesn't seem to take into account where the roads actually are out here (as they wind around mountains) or the actual interaction of certain areas with others. It's also a little weird to see Buchanan County just kind of stranded there, mostly surrounded by the new 1st (which has snapped up two counties that fit better in the old 29th), but not a part of it. If the General Assembly were wedded to the concept of doubling the size of a circuit in the mountains, perhaps it would be better to make Buchanan part of the new 1st and Washington County part of the 2d. I realize that it's going to take multiple hours to drive from one end of the circuit to the other if Buchanan is included, but it's going to take hours to drive from Lee County (the county furthest west in Virginia) to anywhere but Wise and Scott Counties. If a giant circuit must be made it would probably be best to keep as much of the old 30th and the old 29th together as possible.

Perhaps a more interesting thing to look at is how the judges will be allotted after the circuit change.


Don't have time right now to try to compare that to current numbers, but it strikes me strange that the new 2d gets 4 GDC judges while the 1st only gets 3 GDC judges. I don't see how only 3 GDC judges could do the job in the new 1st.

Obviously, this is merely a proposal which has been introduced to the General Assembly. It will be interesting to see how much it changes and whether it actually has legs.

[addendum] The VLW has an article here.
Author: Ken Lammers on 1/20/2011
Email ThisBlogThis!Share to TwitterShare to FacebookShare to Pinterest