Why I Hate Practice Books (And Mopeds)

If you practice criminal law, there is invariably a set of books you cannot survive without. Chief among these are the easy to carry summaries of law which you can take with you into a courtroom (where there tends to be no wifi or even internet for phones). A typical form of these has most of the criminal and traffic laws in one or two books and, under each code section, summaries of cases having to do with each code section. Often - especially in misdemeanor courts where there is a large docket and things have to move quickly - all anyone does is read these two or three sentence blurbs about cases and rely on the summary the publisher has provided. 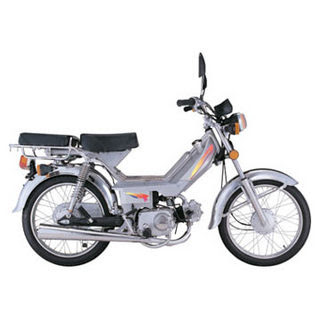 The problem is, the publishers get things wrong. A big problem is that the publishers seem to have a hard time figuring out that a case they have put in their books was overruled a few years later. They just keep putting them in the books as they are republished year after year. This seems particularly true when the law is changed by an act of the legislature.1 We recently had this come up in a case involving mopeds and licenses.

To begin, let me set out the framework. Under Virginia law, if someone's license is suspended generally she can still drive a moped because it is not a "motor vehicle." In Virginia's Traffic Code (Title 46.2) there is a specific exception under the general driving suspended law, Va. Code 46.2-301(B):


For the purposes of this section, the phrase "motor vehicle or any self-propelled machinery or equipment" shall not include mopeds.


"Motor Vehicle" . . . For the purposes of this title, any device herein defined as . . . moped shall be deemed not to be a motor vehicle.

"Moped" means every vehicle that travels on not more than three wheels in contact with the ground that has (i) a seat that is no less than 24 inches in height, measured from the middle of the seat perpendicular to the ground and (ii) a gasoline, electric, or hybrid motor that displaces less than 50 cubic centimeters. For purposes of this title, a moped shall be a motorcycle when operated at speeds in excess of 35 miles per hour. For purposes of Chapter 8 (§ 46.2-800 et seq.), a moped shall be a vehicle while operated on a highway.

However, a person can have her license suspended/revoked for driving under the influence of intoxicants (DUI or DUID). Driving under the influence of intoxicants has an "article" under the Virginia Criminal Code (Title 18.2, Article 2) which goes from section 18.2-266 to section 18.2-273. Included in this article are sections 18.2-271 and 18.2-272 which, respectively, take away the right to drive after conviction for driving intoxicated and provide for punishment if caught driving after the license has been taken for driving intoxicated.

Prior to 2005, the statute which makes driving under the influence of intoxicants illegal specifically included mopeds:


For the purposes of this section, the term "motor vehicle" includes mopeds, while operated on the public highways of this Commonwealth.

In 2002 the Charlottesville Circuit Court (felony trial court) made a well reasoned decision that because 18.2-266 included mopeds only in "this section" and 18.2-6 states:

that a person couldn't be found in violation of driving after being suspended/revoked for DUI under 18.2-272 as long as long as she was driving a moped. Archer v. Fink, 57 Va. Cir. 354 (2002). Thereafter, LexisNexis put a blurb about the case under 18.2-272 in its "Police, Crime and Offenses and Motor Vehicle Laws of Virginia":


For the purposes of this section article, the term "motor vehicle" includes mopeds, while operated on the public highways of this Commonwealth.

Fine, the law has changed. What am I fussing about? LexisNexis never took the case the General Assembly overruled out of their book. Last week someone looked in that book and saw a blurb which said people suspended for DUI could drive a moped legally. There was a big fuss in court until the attorneys were able to get somewhere they could actually do some research and find out that the law had changed 6 years earlier.


-------------------
1 This is not unique to this kind of book. I first noticed this in Shepard's and West's citation checks, which catch 80% of caselaw changes, but few legislative changes which invalidate a case.
Author: Ken Lammers on 11/07/2011
Email ThisBlogThis!Share to TwitterShare to FacebookShare to Pinterest