The day started out with another drive through the farmlands of Michigan. For the majority of this the land was flat but toward the end there were some hills. They weren't really hills like I grew up with in Kentucky, but there was definitely a little bit of change in elevation.

Traverse City is on a spur of Lake Michigan (not sure of the proper term: finger? bay?) and it is obviously a big tourist town. The beaches were full. The harbor was filled with all sorts of boats for sailing and various fun activities. Lots and lots of water out there. The town had a big fair set up which looked at least semi-permanent and besides that it was filled with the kind of quaint little shops meant to separate tourists from their cash.  Gotta say, if it wasn't 12 hours away I'd probably be recommending it to lots of people back home.

The game of the day was a Frontier League game between the Traverse City Beach Bums and the Southern Illinois Miners. The Frontier League is interesting because it is an unaffiliated league so none of its team have any major league support. They also have rules limiting the number of experienced players on each team's roster. I think that each year at least half the team has to be composed of people who don't have any professional experience and the majority if the rest can only have one. In effect, it's a rookie league (much like the Appalachian League back home which I have come to know and, ummmm, kinda think is okay). 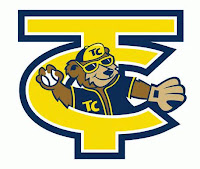 The park definitely had a different feel to it. The outside looked like you were walking up to a beach front apartment building. Once you got inside there were normal baseball seats and a whole lot of tables with beach chairs.  The concessions were in little rooms in the concourse building that had sliding glass windows (it felt kinda little leagueish), although there were a couple walk in bars as well. The field itself was synthetic (not sure if this is still called astro-turf). I think this may be a Frontier League standard since it looked exactly like the synthetic field which the Florence Freedom had when I watched one of their games earlier this year.

The game itself was a defensive struggle. As I do the math, before the game the Miners were .5 games ahead of the Beach Bums in the Frontier League East so both teams had a little something to play for. At the end of 9, the score was 0-0.

It should have been 1-0 in favor of the Bums except for umpire interference in the 4th (or maybe 5th - these things blur a little by the next day). And, when I say umpire interference I don't mean a bad call, I literally mean umpire interference. The Bums had a guy on second and the batter hit a screecher right past the pitcher. It was headed for the gap and the runner on second was already halfway to third and heading for home. The ball skipped once and then it nailed the second base ump. It popped in the air and the second baseman grabbed it so it looked like an infield single with the Bums other runner stopping at third. Of course, even that didn't stand. When a ball hits an umpire it's dead (treated like a foul ball, but no strike) so everything reset and everybody went back to where they were when the play began. The Miners then got out of the inning without any runs.

The game went into the 11th tied and a unique Frontier League rule came into play. Starting in the 11th, the last person put out in the inning before is put on second base at the beginning of the inning. Gotta say, I'm not really a fan of this. I'd rather they adopted the Japanese rule of allowing a tie after 12 innings (but nobody asked me). Anyway, in the 11th both teams played it the same way. The first batter sacrifice bunted, moving the runner to third. The defensive team then walked the next batter to set up the double play. Then the defensive teams got the side out. In the twelfth inning the Miners just sent their batters to the plate swinging. A double scored the man from second and they managed to move that guy across the plate as well for a 2 run lead heading into the bottom of the inning. The Bums managed to get their guy from second home and had a guy on first, but it looked like the safety run which the Miners had put on the board was going to hold. Then, with two outs, the Bums batter hit a long ball to right field. The Miners' outfielder raced to the wall and leapt . . . and the ball went six inches over his outstretched glove for a home run.

It was the second best ending to a game I've ever seen (best was a stolen home base with two outs in the 9th by the K-Mets). I still don't like putting the guy on second base though. It feels very little leagueish.

Today I travel to Grand Rapids to watch the West Michigan White Caps.
Author: Ken Lammers on 7/10/2015
Email ThisBlogThis!Share to TwitterShare to FacebookShare to Pinterest