Day Two: I drove to Columbus to watch the Columbus Crew S.C. play the New York Red Bulls. It was the first soccer game I'd gone to since I watched my high school (Bryan Station) get massacred by Lexington Catholic some time back in the stone ages.

I was a little surprised when they charged me $15 for parking.  That's a little steep, but there was nowhere else to park so I paid it. Next, I had to figure out where the stadium entrance was and get through the rigorous security which required me to pat my pockets before I could enter the park.Then I walked in and the first thing I saw were giant hanging banners in yellow with the pictures of four Crew players painted on them. I felt like I should be pledging loyalty to Rodina and the Party.

The stadium itself felt like a super-sized high school stadium. The whole place is made of metal bleachers. The only pro level stadiums where I've seen that before is single A baseball and even then rarely. The place just did not feel permanent.

And then there was the crowd. At most sporting events I've been to the crowd seems to take on a life of its own. There's a constant buzz even before the game in the concourse area. In contrast, this group of people came in like a bunch of zombies. They looked like loyal fans, although a huge number of them were wearing the old cool logo instead of the new generic. They just did not seem excited at all.

[mini-rant] As an aside, at this point I must note how the Crew have been the victim of management stupidity in the last year. The Crew used to have one of the most unique and easily identifiable logos in all of American sports and particularly in U.S. soccer. It was pretty darn cool: 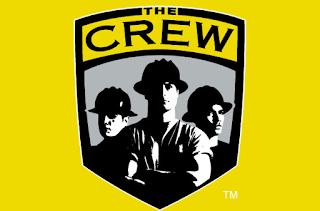 And then they changed to a generic, designed by committee logo which I could have doodled in my spare time when I was in the 7th grade. They also decided that hereafter and for all time they would change from being called "the Crew" to being called "Crew SC" The SC stands for soccer club because I guess we weren't smart enough to figure out what sport those guys running around on the pitch were playing. It was one of the worst guttings and generitizations that any sports club has gone through. If you are standing twenty feet away from someone wearing the new logo it just looks a circle with some indecipherable squiggles in it. 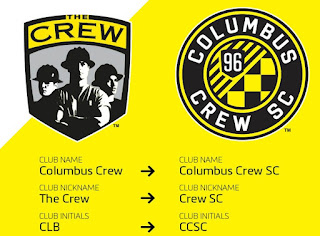 It was clear by looking at the crowd that they are not buying in. While the new logo was everywhere in the stadium, the majority of the people in the crowd who were the obvious die hard fan types were wearing the old logo. And it's too late in the season for this just to be stuff left over from last year. In fact, most of the t-shirts looked like they were new so somebody is still selling stuff with the good logo on it.

This was a monumental screwup on the part of the Crew's owner/management. Will they fix it? No. Will they admit it? No. The new logo is the perfect corporate creation. It is generic enough that it carries no real meaning. Thus it can't really raise any emotional backlash or stir any feelings and you can sell it to everyone. And it feels more European than the old, American-feeling logo and this is a sport where we should all be europhiles, so that's another plus.

God save all sports fans from the idiots in ownership and management. [/mini-rant]

Once the match started most of the crowd sat there quiescent. There were a lot of empty seats for an organization which brags about how numbers are up. To be fair, that might have been because it was the 4th and many people might not associate soccer with the 4th. Anyway, there was a corner section which was filled with rowdies making lots of noise, but it had little or nothing to do with the match. They were just over there singing songs and chanting away oblivious to the events on the pitch.

Eventually, the crowd did start to slowly come to life, but it didn't really happen until about 35 minutes in when the Crew tied the match at 1-1. Even then it seemed to slowly rise out of somnolence until it got about half 75% engaged by the end of the match. I'm not sure the rowdies in the corner ever really engaged, but they made noise the whole night through.

The main lesson I learned while at the match is that soccer is not a good sport to watch from the third row, mid-pitch. My seat gave me an okay view except for when it was blocked by the TV camera which the Crew placed right on the half way line. However, when I left the seat at the break between periods and went to the upper level I could actually watch the play far better. It's something I'll have to keep in mind if I ever make the 5 hour journey back up here to watch another match.

In the end, the Crew won 2-1.
Author: Ken Lammers on 7/06/2015
Email ThisBlogThis!Share to TwitterShare to FacebookShare to Pinterest