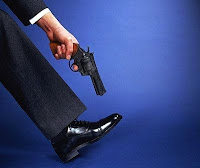 Ray is on probation, but can't stay off the pills. After several positive tests for opioids and not going to the drug counseling his probation officer ordered he is violated and comes to court to answer for it. Basically, the probation officer is just trying to give him a wake up call and with that in mind, I recommend to the judge that he get some community service, stepped up drug testing, and directly ordered by the court drug treatment. The judge accepts the recommendation and Ray goes off down the hall to sign up for his community service and drug treatment.

Ho-hum. All the practitioners out there are asking how is this different than any other day that ends in a Y?

Well, you see, Ray isn't the kind of guy who leaves well enough alone. About ninety minutes after he gets his slap on the wrist, I'm working the post-lunch docket when the person who signs people up for community service and the drug treatment program waves me over and tells me Ray has passively refused the initial drug test ("I can't go") and has been standing in her office arguing and throwing attitude. I tell her to bring Ray back to the courtroom and call Ray's defense attorney who comes back.

As soon as Ray found out he was coming back to court his bladder released and he provided a sample that was - you guessed it - positive for opioids. Even with that, there was a good chance he was leaving the courthouse through the front door. Everybody figured he was going to start out positive for opioids; the purpose of the first test is to set a baseline, not violate him.

The intake officer tells the judge about Ray claiming he couldn't provide a sample and getting belligerent during intake. She says she doesn't want him in her programs, but she'll do what the court orders. It looks like the original deal will fall back in place if Ray has enough smarts to be contrite and pledge his undying dedication to overcoming his drug addiction.

Ray, of course, has other ideas. He starts off by telling the judge how rude the intake officer was and then swears that he DOES NOT use opioids and hasn't for over a year. He's getting worked up and swearing that "those tests are wrong - they're always wrong!" Then, as he is loudly, with a great deal of aggravation, protesting his eternal innocence he finishes with "And she told you I was yelling at her! I wasn't yelling at her! I wasn't speaking any louder than I am now!"

The judge looks down at Ray and says something to the effect that if he had admitted to his drug use and been cooperative Ray'd have been fine, but this was unacceptable. The judge then set him for another probation violation hearing next month and remanded him to jail without bond.

At this point, Ray broke down and started to babble about how he couldn't go to jail because of his fiance and kids and a doctor appointment he had next week. He was still babbling as the deputy led him away.

Friday rolled around and Ray appeared back in court with his attorney for a bond hearing. Everyone in the courtroom knew that as long as Ray was contrite and honest he was going to be let out. Everyone, that is, except Ray. Ray gets up in the witness stand and is far more lucid and level headed than he was a couple days before. He testifies that he'll be living with his grandmother and that he'll do everything he's required to while on bail. Then his attorney passes the questioning to me. I ask one question.

"When was the last time you used opioids?"

No bond.
Author: Ken Lammers on 5/03/2019
Email ThisBlogThis!Share to TwitterShare to FacebookShare to Pinterest