Since 1995, Virginia has used sentencing guidelines as a way to influence judges’ sentencing in felony convictions. The felony sentencing guidelines were part of a general reform in sentencing in Virginia known overall as “Truth in Sentencing” and were done as a way of leveling sentences so that they would be consistent between judges and localities. They’re non-binding, but a judge has to write an explanation on the guidelines form if she goes below or above the guidelines range. When the judge goes back before the General Assembly she can be called upon to explain why she’s been deviating so much from the guidelines. And those people decide whether she keeps her job.

Then, a few years back the Sentencing Guideline Commission promulgated guidelines for revocations in probation violations for “technical violations.” My impression was at the time, and still is, that these guidelines were met with a lot of skepticism. They were not perceived as something that was needed; they were an unneeded solution in search of a non-problem. The mere fact that they called anything except new convictions “technical violations” showed a bias in their point of view. Unlike the felony sentencing guidelines, which came about as part of a sweeping change in sentencing policy and the philosophy behind sentencing, probation violation sentencing guidelines were seen by the cynical (and let’s face it, most of us are pretty darn cynical) as more of a fiscal matter put in place to limit the amount of time that a defendant gets sent back to prison and the Commonwealth has to pay for. Worst of all, probation violation sentencing guidelines face a fairly strong argument that they are an unconstitutional infringement of the General Assembly upon the demesne of the courts.

The last argument would go something like this: The Virginia Constitution states that the executive, legislative, and judicial departments are “separate and distinct, so that none exercise the powers properly belonging to the other.” Va. Const. Art. III Sec. 1. Without a doubt, the General Assembly can control the limits within which a trial judge can sentence a newly convicted defendant. The General Assembly could mandate exact sentences for the newly convicted. Thus, non-mandatory felony sentencing guidelines are well within the purview of the General Assembly because mandatory ones would be.

However, once the person is convicted his suspended sentence is under the supervision of the trial court. His first line supervisor, the probation officer, may be an employee of the executive branch (Probation is an office of the Department of Corrections), but all probation violations basically boil down to violations of “good behavior” and only a judge can make the final determination that such a violation has occurred. Once the judge has determined that the probationer is in violation of the requirement that he be of good behavior it is solely within the purview of the court to determine how much of the probationer’s previously suspended time should be imposed. Any intervention in that exercise of the trial court’s sole discretion by the General Assembly is an “exercise of the powers properly belonging to the other” and a direct violation of the Constitution of Virginia. In fact, the strongest argument that it isn’t unconstitutional is that the probation violation guidelines are not mandatory and that’s a pretty weak argument if it can be shown that the probation violation guidelines are followed. This leads us to one question: are they followed?

It doesn’t appear that they are. 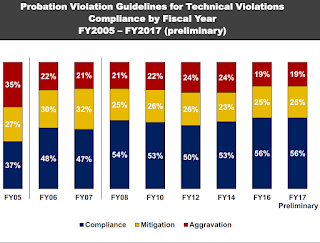 This chart shows that the guidelines are consistent with the amount of time imposed about half the time. I’d say they were followed, except I think many courts may operate the way that I’ve seen the ones I practice in operate. The probation violation guidelines are ignored. The prosecutor and defense attorney negotiate a recommendation for the court without even looking at them. The only time I usually see them mentioned is when the defense attorney uses them as a weapon to try to pry a lower sentence out of the prosecutor or the judge and on the odd occasion when the judge thinks the deal being recommended is much too lenient and references them to ask why the recommendation is so low that it’s even below the probation violation guidelines.


But, you say, Ken that’s just your courthouses. Surely that is not replicated in the rest of Virginia. 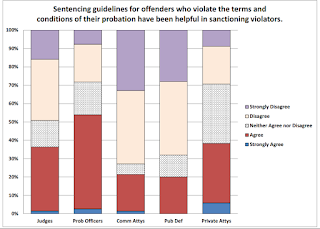 *ahem* This chart shows that at some level most of Virginia is ignoring the probation violation guidelines. The only group of people who even have a bare majority that believe these guidelines are useful are the probation officers at about 54%. The order then descends as follows: private attorneys at 38%, judges at 36%, prosecutors at 21%, and public defenders at 20%. It’s also telling that 49% of judges find them specifically unhelpful as well as 68% of public defenders and 72% of prosecutors. The people on both sides of the bench who only do criminal law as well as the judge sitting on the bench who makes determinations as to what to do with probation violations all basically find probation violation guidelines useless. This renders any constitutional question moot.

Probation violation guidelines should be scrapped. They won’t be. I’m sure we all realize that once laws of this sort are on the books they stay there and once a bureaucracy develops this sort of paperwork it stays around forever. Sure, it’ll be subject to reforms every so often. Every time will be the one that “finally” fixes it and the beast will keep shambling along. Eventually it may even win the day thru the sheer momentum of bureaucracy. That doesn’t mean it’s a good system; it just means that it stays around so long that eventually people give up or don’t know any better. After all, we all know the most powerful argument in a courthouse isn’t case law or the statutes – it’s “that’s the way we’ve always done it.”
Author: Ken Lammers on 5/01/2019
Email ThisBlogThis!Share to TwitterShare to FacebookShare to Pinterest