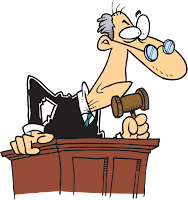 Judge Smith is not happy.

Defense attorney Greene is asking for the eighth continuance in the case and Judge Smith isn't having any of it.

"We were scheduled for a jury today. Tell me why we aren't having the jury and why I shouldn't reschedule the jury to start tomorrow?"

Attorney Greene: "Judge, my client told me two days ago that there is a document at Tiny-Local Bank that I'm going to need for this case."

Judge: "The last continuance in this case was three months ago. Why did she wait to tell you until this week?"

Attorney Greene: "Judge, she told the attorney who represented her in district court before the preliminary hearing. She thought when I replaced the other attorney that I got that information."

The Judge looks entirely unconvinced. "You've been her attorney for the last nine months. She didn't tell you about any of this vitally important piece of paper until three days before the trial?"

Attorney Greene: "Judge, my client wants to address the court."

Client: "I told my first attorney. Then she moved to Canada and you gave me this'un. I met with him when that first happened and I told him about the stuff at Tiny-Local. I didn't know he ain't got it until I asked him why this case ain't been throwed out, 'cuz, ya know, the stuff at Tiny-Local proves I ain't done it."

Judge looks really disgruntled now and engages defendant and defense attorney in a conversation wherein he tries to get someone to take responsibility for the vitally important missing document. That goes nowhere fast. Attorney Greene doesn't remember anything about a document and Client swears she told him months ago.

Judge Smith: "I think there was plenty of time for this paper to have been found. This is at least the third time this case has been scheduled for trial. If the paper was so important it would have come up before the last two trial dates. I think we should bring the jury in tomorrow and get this done."

Up to this point, I have been sitting at the prosecution table minding my own business. Only now, I'm faced with a Hobbesian choice. I can either scramble to get a jury put together before 9 a.m. tomorrow (sleep is for wimps) and let a possible constitutional issue get baked into the case or I can come to defense counsel's aid and possibly get my head chopped off. Being the adventurous (and slightly stupid) type, I stick my head right into that guillotine.

Judge Smith's eyes' pin my soul to the back wall of the courtroom and clearly convey the idea that this is not the time for levity.

Judge Smith gives me a get real look. "I don't see any error here. This is something which the defendant had plenty of time to deal with and is raising only as she is required to go to trial."

Okay, it's pretty clear that Judge Smith believes this is just something being used to delay the trial. For what it's worth, I tend to agree with him. Unfortunately, you never know if an appellate court might go off on a tangent and staying up all night to prep, while doable, probably isn't a great idea. I need my beauty sleep (there are those who might argue I need a several year long beauty coma).

At that, the judge's face turns thoughtful. The defendant gives me a quick, sharp WTF is wrong with you look. The judge takes a few seconds to turn some thoughts over in his head. Then he takes a close look at the defendant.

Client jerks like she's just been kicked and you guessed it, Client turned up positive for cocaine, alprazolam, and and buprenorphine. Judge Smith revokes her bond.

Judge Smith: "No ma'am. Your Attorney needs time to get the document you need for your defense from Tiny-Local Bank. The docket is busy for the next month. We'll set this for the 22nd of next month. Good day, ma'am."


So Endeth the Story
Author: Ken Lammers on 9/10/2019
Email ThisBlogThis!Share to TwitterShare to FacebookShare to Pinterest