For Want of Moral Certainty 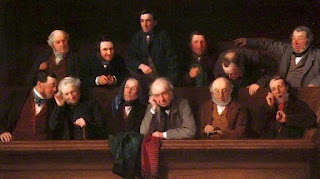 Once upon a time, the standard for guilt in a criminal case was "moral certainty." For instance, in Anderson v. Commonwealth, 83 Va. 326 (1887), the Virginia Supreme Court said of certain evidence "The most that can be justly said of it is that it merely excites suspicion against him, which is a very different thing from proving his guilt to a moral certainty." Since this was a case concerning circumstantial evidence the moral certainty language has to be carried forward into modern Virginia case law involving circumstantial evidence: "there must be an unbroken chain of circumstances proving the guilt of the accused to the exclusion of any other rational hypothesis and to a moral certainty." Taylor v. Commonwealth, JUN18 VaApp no. 0687-17-1 (U). See also, Nebraska v. Sandoval, 511 U.S. 1 (1994)(explaining that "moral certainty" instructions in the 1850's were the beginning/basis of the beyond a reasonable doubt standard). However, actually using "moral certainty" has fallen out of favor in modern jury instructions.

Why? Well, I'm certain all sorts of sophistic reasons have been given, but I think that the reality probably breaks down to two things. First, the assumption of a common morality fell out of favor in the universities and the relativistic viewpoint eventually became common and accepted amongst those educated in them so that it "moral certainty" became something considered at best poorly phrased and at worst harmfully anachronistic. That placed the judges and academics against it and probably those defense attorneys that didn't think it through too much. Second, the prosecutors went along with dumping it because "moral certainty" comes across as a much higher standard than "beyond a reasonable doubt" no matter how many times we're told they are the same thing.

So, how do you deal with the relatively more benign "beyond a reasonable doubt" standard if you want to beef it up? CrimProf Blog points to an Article set to be published in W&L Law Review which has a prescription for this by Michael D. Cicchini: Reasonable Doubt and Relativity. In it, Mr. Cicchini provides an interesting study he has done in which he shows that instructing jurors on lower civil standards in comparison to beyond a reasonable doubt raises the point at which a juror is willing to convict. I leave it to people more adept at statistics and procedures of conducting a study to address his methods, but I'll say that his result feels right (not always a perfect barometer, but often all we truly have). I was going to say I didn't think the case he presented to his study group could make it to a jury past whatever motion a particular jurisdiction uses to show legal failure of the evidence (motion to strike, directed verdict, judgment as a matter of law, &cetera), but I guess if the prosecution got leave to call the victim as a hostile witness it might pass muster. In any event, whether the case was legitimate isn't the point. The differences in the levels of confidence needed for a conviction with and without contrasting beyond a reasonable doubt to lower civil standards is the point.

I agree that the comparison should be pointed out to the jurors. In fact, back in the beginning of time when I was a defense attorney, I had a whole spiel I either used in voir dire (remember Virginia does mass voir dire) or in closing starting at reasonable suspicion, going through probable cause, emphasizing preponderance, and pointing out there was even a higher standard than that - clear and convincing - before we even start to talk about beyond a reasonable doubt. More important than my agreement, the courts of Virginia agree that the comparison should be pointed out.

The burden is upon the Commonwealth to prove by the evidence beyond a reasonable doubt every material and necessary element of the offense charged against the defendant. It is not sufficient that you may believe his guilt probable, or more probable than his innocence. Suspicion or probability of guilt, however strong, will not authorize a conviction, but the evidence must prove his guilt beyond a reasonable doubt.
(From Jury Instruction on Conviction Standard)

It's not exactly what Mr. Cicchini is asking for, but it's pretty close.

However, I think Mr. Cicchini is particularly wrong on one point. If we are going to bracket beyond a reasonable doubt from below, we need to provide the bracket from above as well. I guess this is where I as a prosecutor offer my "poorly reasoned, kneejerk complaints."😎


The upper bracket is needed because there is always the possibility that space aliens landed in the backyard and stole the money that grandma kept in the safe rather than grandson Bobby (to whom all the evidence points). There's always something a juror can fasten upon such as "He's a Taurus and if the moon was in the third quadrant he would have too involved with romance to rob a bank." These are not reasonable doubts.

Of course, a defense attorney will come up with better hypotheses than those, but if he's competent he'll come up with something. Standing pat on a "they didn't prove it good enough" defense is an extremely dangerous place to be and if you want to talk about something that would probably drop the level of confidence a juror would need to convict this is it. And, no, I'm not saying a defendant has a duty to produce evidence or explanation. I'm just talking about realities in front of a jury and I've seen plenty of good defense attorneys stand in front of jurors without having put on a lick of evidence and weave a tale of possibilities in and out of the prosecution's evidence.

The jury has to determine if any doubts it comes up with itself or is fed through the good offices of the defense attorney are legitimate. Nowadays, as a prosecutor I bring up in voir dire or closing argument the difference between "beyond a reasonable doubt" and "beyond all possible doubt." Once again, more importantly, the courts in Virginia point this out to juries.

(From Jury Instruction on Conviction Standards)

Mr. Cicchini devotes a small section decrying this, but I think the Virginia jury instruction is solid. Of course, eventually the jury sorts out which doubts are reasonable or not. This instruction merely informs them they have to stick to those doubts which are reasonable. It's the defense job to push the "beyond a reasonable doubt" standard as high into the stratosphere as it can and I don't begrudge them that. It's the job of the judge, through jury instructions, to tell jurors that they don't have to go as high as the defense would like them to. Could the instruction be more concise? Probably not. Lawyers aren't capable of writing anything concise. I'm pretty sure it's somewhere in the Bar's ethics rules. If the jury instruction just said "You shall neither consider nor create explanations that are unreasonable in determining if someone is guilty beyond a reasonable doubt" anybody could understand it and we wouldn't have things to quibble over.

And on a slightly different point . . .

Let's be honest, while we lawyers do tend to quibble endlessly over jury instructions, they are far from the most important factor in the outcome of a case. It's my opinion that quite often the primary factor is the potential jury pool. Trials in an affluent suburb are going to get different results than those in rural farm country and both of those are going to get different results from a jurisdiction where there's a lot of impoverished, unemployed former coal miners and their families getting checks from the government.

Next time you think that jury instructions are terribly important, sneak a peak at the jurors as they are in minute fifteen of jury instructions being read at them. Then explain to me how terribly important it was that y'all argued for twenty minutes over the placement of that comma in the instructions. It's fun to argue all these points, just don't lose track of the truly important parts of trial craft.
Author: Ken Lammers on 9/06/2019
Email ThisBlogThis!Share to TwitterShare to FacebookShare to Pinterest