Comparing the Virginia Right to Bear Arms with the Federal 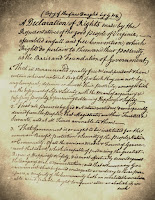 
That a well regulated militia, composed of the body of the people, trained to arms, is the proper, natural, and safe defense of a free state, therefore, the right of the people to keep and bear arms shall not be infringed; that standing armies, in time of peace, should be avoided as dangerous to liberty; and that in all cases the military should be under strict subordination to, and governed by, the civil power.

The highlighted section was added in 1971. Prior to that, it was a reflection of the belief of our founding leaders that a standing army is dangerous and that the citizens could and should stand to the defense of their nation as a militia instead. This belief is also reflected in the preamble section of the right recognized in the Federal Constitution.


A well regulated Militia, being necessary to the security of a free State, the right of the people to keep and bear Arms, shall not be infringed.

Inherent in the militia concept is the idea that each person in the militia will possess and bring with him a firearm. In fact, it was a requirement under law. Don't believe it? Here are a few muster notices for various militias.

Notice that they all require the militiaman to report with his weapon. The last one even specifically lays out what weapon and accoutrements the militiaman is required to bring with him.

The Virginia Declaration of Rights, as modified and included as Article I section 13 of the Virginia Constitution, is in some ways much clearer. There is no doubt that it is referring to everyone in Virginia. It defines "militia" as "the body of the people." That's me, you, and every other permanent resident of Virginia. More specifically, most of us are in the unorganized militia which is a legalistic way of saying that the Commonwealth of Virginia has been failing to train us to arms as it seems required to per this constitutional provision.  BTW, for those of you who don't know, if you're between the ages of 16 to 55 you are subject to activation at the behest of the governor. Of course, the statutes are an overlay and limitations they place on "the body of the people" reflect choices in using the militia; they don't actually limit the composition. In other words, the fact that a statute limits ages of those serving within the militia doesn't mean that the age is actually limited - it just means the Commonwealth will only use those within the given age range.

The ambiguity is what "arms" means. As this right is specifically tied to militia service it seems to be those types of weapons which would be used by a militia. Note the third call to muster above. The arms for a militia are those which are minimally acceptable for military usage. In other words, if the governor were to call up companies from the unorganized militia and every person showed up with their pistols that unit would be almost completely useless. So, pistols wouldn't be covered by "arms" under the Virginia constitution. On the other hand, were the entire company show up with "assault" rifles the "arms" would be appropriate. This seems to indicate that under the Virginia Constitution pistols would have few protections while assault style rifles would have much more.

Caveat: Yes, we all know the militia concept is outdated and exists now only as a vestige of an unrealistic - one might even say quaint and romanticized - belief of our forefathers that our country could be adequately defended by citizen militias. Nobody believes in this system anymore except for some folks out there forming independent militias which are not what our forefathers meant when they wrote militias into our constitutions. "Who are the militia? They consist now of the whole people, except a few public officers." George Mason (debating Virginia's acceptance of the Federal Constitution). The militias foreseen by our constitutions consist of you and me and everybody in our county called together to serve under an officer or two appointed by the government.

Caveat 2:  OMG. I'm still subject to recall for military service. Hopefully, the governor of Virginia won't need to call me into militia service for just a couple more years so that I can age out. Of course, the level of desperation that a governor would need to call a overly rotund, terribly out of shape, old guy like me into militia service would probably require a simultaneous invasion by Canada, Mexico, China, Bulgaria, and Species 8472. Even then, a guy whose main job when he was in the Army was to speak Arabic probably wouldn't be of much use. Let's all keep our fingers crossed that it never comes to that.
Author: Ken Lammers on 12/01/2019
Email ThisBlogThis!Share to TwitterShare to FacebookShare to Pinterest