A moment in Court: I Decline! 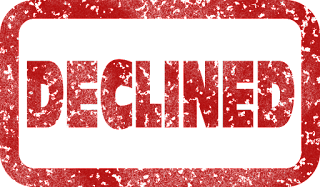 Jane Smith is having a hearing to determine whether she is competent to stand trial and she demands to speak to Judge Greene. It wasn't my case so I didn't see the whole thing, but it caught my attention when I walked into the courtroom and Jane started talking about the Judge's ex-wife.
Judge Greene's head bobs back and all the attorneys in the courtroom look over at Jane and then up at the Judge. For her part, Jane doesn't even notice. She just starts describing the atrocities that the Judge's ex has done to her in the jail. After a little of this Judge Greene gets his feet back under him and interrupts Jane.
"Ma'am, I don't have an ex-wife."
This, of course, bounces right off Jane and she keeps going. For the next fifteen or so minutes I'm walking in and out of the courtroom trying to take care of my case, but each time I walk in Jane is trying to convince the Judge that he has an ex-wife, she works at the jail, and she has been doing terrible and strange things to Jane.
Finally, things start to wrap up. To absolutely no one's surprise, the Judge finds Jane incompetent.
"Ma'am, I'm ordering that you be transferred from Pitcairn County Jail to Better Minds Mental Care Hospital for treatment to restore you to competency."
"I decline."
The Judge had started to write some notes so his decision could be reduced to a written order, but at Jane's statement his head comes back up looking bemused.
"Excuse me?"
"I decline to go to Better Minds."
Up to this point, the Judge has been remarkably calm and patient considering the fact he just found out that he has an ex-wife who is apparently tormenting inmates at the local jail. Now he looks like the patience might be slipping a little bit.
"Ma'am, I can't force you to cooperate with treatment, but you're going to Better Minds. If you don't cooperate you'll probably be there longer than you need to be."
"I decline to go to Better Minds and I decline any treatment."
At this point, I have to leave the courtroom to deal with some absolutely vital matter (probably had to sign some discovery order or something). I never saw how the case ended exactly. However, I have to say that the "I decline" defense is a novel and interesting one. All sorts of innovative uses come to mind.
-------------
Judge:  For the crime of bank robbery, I sentence you to 20 years in Black Plague Supermax Penitentiary.
Defendant:  I decline.
Judge:  Ummmm . . .  Okay, how about 10 years at New Hope Medium Security?
Defendant:  I decline.
Judge:  Okay, look, I have to sentence you to something. How about we take advantage of our Canadian prison exchange program? You spend two years in a Canadian penitentiary where they feed you caribou steaks and sauteed truffles while apologizing to you every day because the unenlightened bank tellers couldn't understand the robbery from your point of view and how it wasn't really your choice but a reflection of societal failures? How about that?  I do have to warn you that Canadian prisons are infested with house hippos and you will probably be forced to eat poutine, which is considered cruel and unusual punishment here in the States. Still, most people think that's balanced out by the daily hockey games and availability of maple syrup for every meal.
Defendant:  Yeah, okay. I can take that.
------------
I think any defense attorney who doesn't recommend this exciting, new technique to their client may be committing malpractice.
Author: Ken Lammers on 7/15/2020
Email ThisBlogThis!Share to TwitterShare to FacebookShare to Pinterest