BD forwards this article to me about the Chief Justice of Virginia's Supreme Court meeting with public defenders. It goes on to discuss what is being done to fix the problems in indigent defense. Of course, we all know what would solve the problems: Increase by at least 100% the caps on payments to court appointed attorneys and require both the Commonwealth and localities to match every penny they give to prosecutors with a penny given to the public defender (where there are PD offices). Of course, we all know this isn't going to happen either so I was just about to dismiss the article as another case of hand wringing and non-solutions when I cam across this statement:

Virginia has some of the most stringent discovery rules in the country. Defense attorneys are not allowed to see complete police reports if the prosecutors decide to withhold them.
. . . .
“I don’t think it makes the system unfair,” said Loudoun Commonwealth’s Attorney Jim Plowman when asked Wednesday about Virginia’s discovery rules. “We have to give [the defense attorneys] everything and they give us nothing, so in that respect it is not unfair.”

Now, that's not really true. Under Virginia Rule 3A:11 if I file for full felony discovery I am required to turn over scientific tests/reports, provide the prosecution with my client's alibi, and give the prosecution any reports I have concerning my client's mental condition (assuming any of the three are relevant to the trial).

As an example, I have jpeg's below of a discovery motion (the top two) and a reply (the last one; click on them to see larger versions). Three caveats: First, it is Rule 7C:5 discovery from general district court (preliminary hearings and misdemeanors) and this rule does not deal with expert or alibi evidence (I guess it's assumed not to be at issue in district court). Second, the names have been changed to protect just about everyone. Third, they are from different cases (done out of an abundance of caution).

After you read them, you will realize why, no matter how many times the Virginia courts appellate say it isn't, the primary purpose of the preliminary hearing in Virginia is to get discovery. Most judges realize this and allow some lattitude in questioning as long as it doesn't turn into too much of a fishing expedition.

[addendum] When I click on these jpegs in Explorer it brings up small pictures. If you place the mouse pointer over the picture for a second a box will appear at the bottom right and you can click it to make the pictures large enough to read. 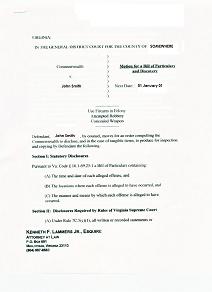 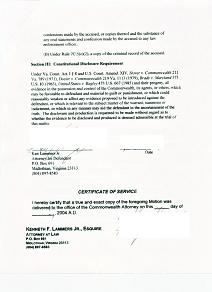 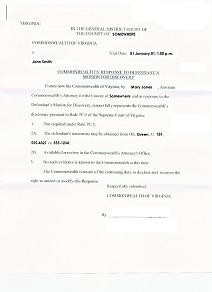 Author: Ken Lammers on 8/07/2004
Email ThisBlogThis!Share to TwitterShare to FacebookShare to Pinterest