Every county courthouse has things which set it apart. Yesterday, I was at a courthouse a couple hours down the road and thought I'd share some of the unique features.

Most of the courthouses I've seen in Virginia have the ubiquitous Confederate soldier somewhere on the grounds. Not this one; here they have a coal miner. 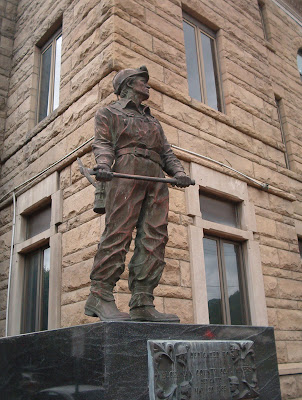 That's pretty cool and more appropriate to this area of Virginia.

Of course there were monuments to the county's war dead, including Vietnam, Korea, WWII, WWI, and the War of Northern Aggression. Inside there were the required pictures of important people from times gone by (most courts have these). However, there were also mounted animals.

The deer has a placard introducing him as "Moe" and explaining that he was taken from a poacher. No explanation for the predator.

The coolest thing in the courthouse was something I couldn't take a picture of. In the Circuit Court there is a stained glass window of Lady Justice behind and above the judge. However, I just didn't have the nerve to pull my camera out and snap a photo while court was in session.
Author: Ken Lammers on 5/28/2008
Email ThisBlogThis!Share to TwitterShare to FacebookShare to Pinterest