New York is starting to test out pistol cameras. Here's a picture of one on a mock pistol. 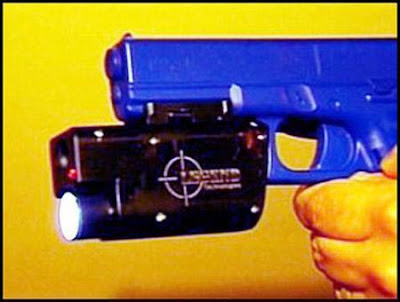 Issues: (1) Officer Safety - Won't that throw off the balance of the pistol and screw up an officer's accuracy in a a life or death situation?

(2) Citizen Safety - Won't this encourage officers to draw their weapons so that they have video evidence of the events at a scene? And a drawn weapon, even if only meant to video the scene, increases the likelihood of something bad happening.

Suggestions: Build s small camera into headgear or to be placed on the shoulder (you know, where everybody used to keep the mike before earpieces became the way to go).
Author: Ken Lammers on 5/13/2008
Email ThisBlogThis!Share to TwitterShare to FacebookShare to Pinterest

Pistol weight and adjustment could be an issue at first, but I think it could be remedied through proper training. Similar—and more significant—adjustments had to be made when police departments made the switch from revolvers to semis, and when the military swapped out the M-16 for the M-4.

But I couldn’t agree more with your second point. The incentive to record would certainly come into play, especially when things got out of hand. On the other hand, if police were strictly forbidden from drawing their weapons early, would the camera really make a difference? Is it not the conduct that takes place seconds before an officer draws his weapon that causes him to do so? With it holstered, nothing is gained.

Finally, would the camera always be on, or would the officer have to somehow turn it on while simultaneously getting his weapon to the ready? What might be a small step could make a big difference.

-Blakely, judgmentdayblog.com (and thanks for the link!)

There are new radios (where the officers usually wear on their chests), that have video and audio capacity. This would avoid the fear of someone drawing their gun to get video capability.