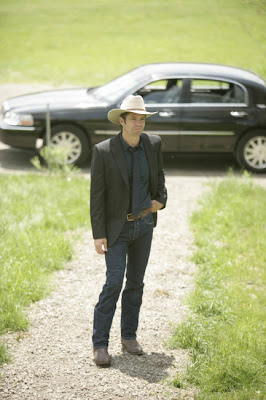 5 second review: Justified? In what?

30 second review: They want me to believe that's Kentucky?

Full review: This show is the perfect example of why you should film a TV show where you claim it is taking place.

The guy on the left, Marshal Raylen Givens, screws up in Florida. He gives a scumbag 24 hours to leave town and when the scumbag doesn't Marshal Givens shoots him dead. Of course, the scumbag drew first, so Givens is on the right side of the law by a razor thin margin. The result? The Marshal Service decides to move him back to Kentucky, where he grew up. From that point forward we get to see him hook up with a murdress, interact with his ex, do a superior job of marshaling, and shoot a bunch more people.

All-in-all, it's probably a slightly above average cop drama. However, it is unwatchable if you live, or have ever lived, in Kentucky. The people who wrote these scripts have never been to Kentucky and don't know anyone who has been. They just seem to pick locations out of thin air and throw them in. In the first episode they go from Lexington to Somerset to get a beer (that's a 2 hour drive for a beer). And they travel from Lexington to Harlan County like it's a 30 minute drive down the road (it's 3 hours). I don't know what city that is that they are trying to pass off as Lexington, but it's not even close. At least look at a photo or two of Lexington so that you can realize that THERE AIN'T ANY BIG STEEL BRIDGES IN LEXINGTON. There sure as heck isn't one on Tates Creek Road; take my word for it - I've driven that road a few times in my life. In fact, nothing I've seen in this show looks like Kentucky.

And then there's the people. What accents are those which are being thrown around? I've never heard them before. And, I haven't heard a Kentucky conversation from a single one of them. By that I mean that nobody's mentioned basketball - not a single person. This is a State wherein I was watching an NFL playoff game last year and the local channel cut in and broadcast a high school basketball game instead. People in Kentucky talk about basketball. No, that's not quite right. People in Kentucky talk incessantly, all the time, in every conversation, every day about UK basketball. They criticize the coach. They weigh the skill level of players. They talk about possible recruits. They live in expectation that the coach will get a national championship every three or four years. If he doesn't they will rip apart every second of every game, talking about every stupid thing the coach did. Heck, they'll even do this if he's a winning coach; it is impossible for a UK coach to satisfy the fans. They are everywhere. That Marshal's office in Lexington would have UK stuff on at least half the desks and cubicle walls. About 40% of the people in town - and in the counties - would be wearing UK clothes every day. Apparently, in whatever alternate reality this show takes place in basketball doesn't even exist.

C'mon. If you were going to shoot in Genericsville, Pennsylvania, you should have just put your show's location in Pennsylvania. It'd be a better fit. Since a good deal of your "location" shots are just green screen through a car window, you could at least have driven through Kentucky/Lexington/Harlan County to get those shots. Yeesh.
Author: Ken Lammers on 4/27/2010
Email ThisBlogThis!Share to TwitterShare to FacebookShare to Pinterest

You are definitly right about the basketball. BTW US Marshal only has one "L" in it.

You know, as soon as I fixed this someone in my office who was reading it asked me if marshal wasn't supposed to be spelled with two L's. Heh. I guess I'm not the only one in the world who can't spell.

This is the type show I tape and watch while I ride the exercise bike. As I watched the first one I thought it would probably be the last for me until I saw Elmore Leonard's name scroll down.

Funny how that one name made me a fan.

As for the location problems, that will probably be hard for you to overcome. But rest assured, that problem plagues just about every TV production not filmed on location.

You should have seen the lovely green hills outside of Odessa, Texas, in the first season of Heroes. Looked so much like Southern California and not at all like the desert surrounding the real Odessa. Oh well, it's only television.

Try watching NCIS or Bones for their version of the DC Metropolitan area. I burst out laughing every time our NCIS heroes get from DC to Manassas in 25 minutes during rush hour or race unimpeded down I-95 at all hours of the day. They NEVER get stuck in traffic. If these shows were real you'd see them cursing profusely as they sit in traffic stopped completely because some idiot ran into a tourist bus on one of the bridges. You never hear them talk about the Beltway, I-66, the BW Parkway, or the bottlenecks on Constitution and Independence Avenues. They never have trouble parking. You never hear them complaining about Danny Snyder and the mess he's made of the Redskins, or of the predations of DC's parking enforcement thugs.

When they show the intrepid cast members traipsing around in the woods, you never see anyone getting hung up on the almost impermeable Virginia underbrush. You NEVER see them sweltering in the 90 plus heat complicated by the 85 plus humidity, or swatting at the ever-present mosquitos. Good lord, no matter what time of the year they're always shown wearing jackets and caps. EVERYBODY swelters outside in DC's summertime.