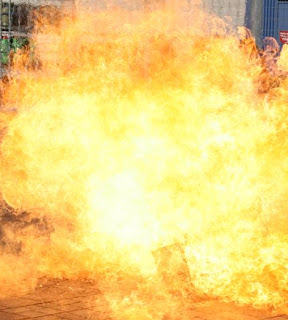 
Jerome sat there with the two prosecutors, holding the silence in the hope that they would fill it with the information he needed. Finally, the senior man broke it.

"Father, the investigation is ongoing.  It is far from complete and we are not in a position to make any of it public."

This time the silence came from the other men and Jerome broke it.  "I'm not here to report things to the paper.  I'm here to help in any way I can.  The only person I am supposed to report to is Bishop Mannion."

The silence carried on so Jerome filled it again.  "I expect to be here until everything is shaken out.  I was speaking to Yusif before Abby came in about possibly helping with legal matters.  I went to Boston College Law and I worked for six years at the Richmond office of Spears, Allenby, Austerlitz, Evans, and Metcaffe.  As you might imagine from the rather ostentatious name, I didn't see the inside of a courtroom for those years. There's far more money and perceived prestige," he rolled his eyes expressively, "in arguing over clauses in five hundred page contracts between IBM and Motorola than there is in going into a courtroom where you might actually affect people's lives."

He knew he was laying that on a little bit thick, but he always worried that pulling out his legal bona fides would create a gulf.  It never hurt to salve the egos of the everyday lawyers he dealt with more often in untangling the local affairs of churches.  After all, he was no longer working at a snobby multi-national law firm.

Yusif saw the gulf between his boss and Father Tolton widening.  The cleric seemed to lack a basic understanding of how lawyers outside of big cities operated.  A biglaw firm like Spears, Allenby, Austerlitz, Evans, and Metcaffe was something entirely alien to Brad.  Yusif understood somewhat because he worked at Boreman & Franklin in Charleston for several years before he left West Virginia to take his job here.  However, Brad was a dyed in the wool local guy for whom law school had been a step in his planned political career.  In fact, going to the University of Kentucky had set him apart from the other local attorneys.  None of the twelve lawyers in the county had ever thought that practicing law had anything to do with locking themselves in an office on the thirty-second floor of a downtown tower for ninety hours a week.

He decided to jump in.  "Brad, I was talking with Father Tolton before Mrs. Mahan showed up.  I thought maybe he could come onboard as an unpaid deputy for this matter. That way he would have a fiduciary responsibility to this office and . . ."

Brad interrupted him.  "Can't do it.  Statute says that larger jurisdictions can have unpaid deputies, but we can't have one unless the comp board approves it."

"How's that?" Yusif focused in on Brad. "The Virginia constitution only allows the General Assembly to set the laws you have to enforce and how much money you have."

Brad was scrambling.  What in the world was Yusif thinking?  Thank goodness this topic came up at the last commonwealth attorney seminar in Williamsburg.  Some commonwealth in the mountains on the other side of West Virginia was running an office entirely by himself and had a kid from the University of Chicago Law School who wanted to work for him without salary for two years because some charity would pay for the kid's room and board and pay off his loans. That commonwealth attorney had been willing to deputize the kid to work without pay, but the charity's lawyers had nixed it because the statutes didn't allow it in counties with smaller populations.

The idea of having a Catholic priest as a deputy Commonwealth Attorney was a nightmare.  The Father would have a higher loyalty to another organization and if the Bishop told him to do something Brad was certain that would trump any duty owed to this office.  On top of that, he already had to deal with the fact that he married a Catholic woman.  Having a priest in his office was a problem he did not need in next year's election.

"I can't hire you on Father, but I can brief you up on what we know so far. However, you do have to give me your word that you will not disclose this publicly."

He waited.  Father Tolton finally spoke.  "As I said before, I will not reveal anything that you tell me except to Bishop Mannion."

After considering that for a moment, Brad continued.  "Okay.  The investigation isn't complete yet.  The only persons who have been interviewed are Captain Ross and Grant Lasley, one of the defense attorneys.  The FBI and State Police have sent a lot of stuff to labs to be analyzed and none of that has come back.  Things are going to change."

When the Father nodded, Brad dove into the description of what he knew. "The Pahl brothers were on trial for rape and abduction.  The trial broke for the day and deputies Carr and Boyd were escorting the brothers to the holding cell over in the Sheriff's office in the building next to the courthouse.  They let the brothers' attorneys and their uncle, Father Ted Pahl, go with them.  Stopping in the alley between the buildings, they let the brothers smoke while they spoke with their attorneys.  Captain Ross came out and was breaking all that up when someone, probably two people, opened fire on them from the parking area behind the buildings."

"The civilians were on the side of the alley next to the Sheriff's office and the deputies were next to the courthouse. The initial shots went into the civilians.  We don't know how many bullets were fired, but there were rounds both from a pistol and AR-15.  That first volley hit Kyle Pahl in the neck, Justin Pahl in the chest twice, Grant Lasley in the elbow, and Father Pahl in the leg.  The Pahl brothers fell where they were and Lasley, who is a combat vet, grabbed the Father by the back of his shirt and dragged him behind the deputies. The other defense attorney, Keith Tolliver, turned and ran toward the front of the alley.  He got three bullets in the lower back and went down.  The deputies took cover behind a propane tank that was next to the courthouse.  Then one of the attacker's bullets holed the tank and a white gas filled the back of the alley.  Captain Ross grabbed his keys and ran for the door to the courthouse. He got to up on the little patio to the door and four bullets hit him.  His vest caught three and one hit him in the arm and he was thrown off the porch into a bunch of plastic trash containers.  Then something, we don't know what yet, ignited the gas."

"The explosion caught the two deputies behind the tank and threw them back ten feet. They suffered concussive traumas and third degree burns.  Lasley and Father Pahl were lying on the ground and the explosion mostly missed them.  Lasley got burns on his right hand, the back of his neck, and had to have his left arm removed above the elbow, but he came through it without any other serious injuries.  Father Pahl may have already been dead when the explosion occurred.  His leg wound hit an artery and he bled out.  The explosion reverberated from the solid granite courthouse and hit the Sheriff's office hard.  It was an old inn which was converted for use by the county government about thirty years ago and about a third of it was immediately flattened.  Some of it fell on the the Pahl brothers and they got multiple internal injuries on top of the bullet wounds."

"Neither Tolliver or Captain Ross were hurt by the explosion.  Tolliver probably won't be able to walk ever again, but he's awake. He just won't talk to anyone in law enforcement about what happened.  On the other hand, Bo . . ." He paused when he saw a questioning look in the Father's eyes.  "Yes, the same Bo who came to our wedding reception.  Bo wouldn't have even gone to the hospital in Tennessee if Sheriff Minton hadn't ordered him to.  He's already back on duty with a bandage on his right forearm.  The bullet didn't even hit any muscles or bone.  It hit the arm at an angle, furrowed under his skin and lodged there.  He claims the bruises on his back are worse than the bullet wound. Apparently, the porch and the trash cans they found him under must have blocked the explosion so he didn't get any concussive injuries or burns. Sheriff's got him riding a desk for now until the arm's completely healed."

"Right now the only one dead is Father Pahl.  However, The Pahl brothers are never expected to regain consciousness and the doctors are just waiting for the old man to sign off on removing them from respirators.  Deputy Boyd is in the same condition, but the hospital can't find anyone related closely enough to make the call.  They're going to have some sort of meeting to decide what to do tomorrow.  Deputy Carr was taken off the respirator two days ago and wasn't expected to make it through the night.  His family is sitting a deathwatch with him down at Beauregard Medical down in Johnson City."

"Father, I don't know how familiar you are with Virginia criminal law.  Both killing multiple people and killing law enforcement officers call for the same thing.  This is a capital case."
Author: Ken Lammers on 11/14/2012
Email ThisBlogThis!Share to TwitterShare to FacebookShare to Pinterest