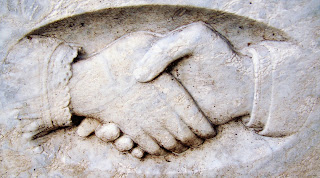 Promptly at six thirty, Jerome arrived at 1215 Old Lebanon Road and found a house overflowing with people. As well as the expected Brad, Maggie, and Abigail, the house contained a few dozen others. He found himself being introduced to numerous Dollerbys and a surprising number of Mahans. When he asked about that, Abby explained how several Mahan families realized that they could sell their two bedroom hovels in whichever city they were in and use the money to buy huge houses here. Four families of Mahans uprooted and moved to the mountains. Abby went on to brag about how two of the Mahan men were now deputies and one of the women was a police woman in the Saint Minas Department.

It was also his first real introduction to the Dollerby family. A number of Dollerbys were at the wedding, but that event had clearly been dominated by the Mahans. He met Brad's parents, Bradley Senior and Tracey. Senior had several businesses, including selling heavy equipment to the mines and the only new car dealership in Bartlette County. Tracey was a vice-principal at Bartlette Unified High School. He also met the "Aunts" - Alison, Jeanie, and Elspeth - each of whom was in her late fifties or early sixties; the group of them seemed to fill the same role in the Dollerby clan as Abby did in the Mahans. After they cornered and interrogated him for thirty minutes he was rescued by Senior who explained that he had to introduce the guest of honor around to others who were waiting to meet him.

After a couple hours of talking with various persons or groups from either of the families, Jerome finally filled a plate from the various bowls and crocks sitting on the table and counters in the kitchen and managed to escape to the back porch where he sat on a patio chair and ate in the dark. He could see the two families inside mingling cheerfully. It was a celebration of life and his arrival had been the spark that ignited it. It was nights like these when he felt the Lord's touch - or maybe tonight it was more the Holy Spirit. He had never once seen a miracle on the scale of a sea parting or water turning to wine. Yet, he constantly saw small miracles such as this. These people needed something to bring them back from blackness and anger and the Lord, through the good offices of the Bishop and the prodding of a fierce Irish matron, had sent him so that they could get together and start to heal themselves. He finished his plate and sat back in the chair listening to the the soothing murmurs of conversations that he could not quite hear.

A man walked up back lit by the light of the glass doors to the house.

He nodded his head. "Evening, Father."

Jerome nodded back and the man continued. "It's a good thing you've done here, Father, but it is going to get worse before it gets better. That man," a finger pointed toward Brad, "will charge at least two people with capital murder. If you stay here and oppose him, as you will be required to by your Church, you turn these people from great friends into enemies. Oh, Abigail Mahan will probably stand by you. Her loyalty to you and your Church is probably stronger than her loyalty to her family. She'll lose the status she cherishes so much in the family as a result. Rifts will tear the families apart and Brad probably will not be re-elected next November."

"On the other hand, these families are now strongly tied together. Without your hindrance that harmony will continue. Brad will win his trial and re-election. The publicity will probably make him a strong candidate for Attorney General. At the very least he will become a delegate or senator in the General Assembly. He'll also back Bo Ross for Sheriff which will mean the county can have an honest sheriff for years to come."

"You've fulfilled your responsibility. Go back to Richmond and tell Bishop Mannion what happened to Father Pahl. Leave these people to a better future."

"Satan?" The way the man's face stretched, Jerome could sense he was smiling. "I am neither Paul nor Lucifer. I do not come to tempt you Father. You have already done your duty. Thus, I cannot tempt you away from it. I just lay out the possible futures so that you can choose the proper course."

Then someone started shaking Jerome's arm and he woke up. "Hey, Mister Father?" A boy who looked all of eight stood there. "You okay? Why you sleeping out here in the cold?"

He smiled at the boy. "Sometimes we old folks just get so tired we doze off wherever we are."

The boy looked skeptical. "Huh. The Brads are looking for you. I think Mrs. Abigail wants to end the party and they want you to pray or something."

Standing, Jerome left the patio chair in the darkened corner of the patio and walked toward the glass doors. As soon as he opened the door the boy ran past him into another room where the young members of both clans had staked out as their territory earlier in the night. Senior saw him as soon as he walked in the door and called to Abby.

"Here he is Abby. No wonder we couldn't find him; he was hiding outside in the cold."

Abby hustled up, took one look at him and turned back to Senior. "Get everybody's attention. I think it's time we wrapped this up and let the Father get some sleep."

Senior let out some sort of yelp or yodel and the whole house quieted long enough for him to announce in a loud voice that everyone should come to the family room. After a minute or so, once everyone who could had crowded in and people stood as close as they could in the rooms next over, Senior called for silence again and then pointed to Abby. She looked around at all the people around that towered over her and, using Senior's arm as a brace, she climbed up on the wooden coffee table. Her voice carried through the room with a clarity that stage actors could only dream of.

"Listen up ya bunch of heathens, Protestants, and people who really, really need to go to confession." With that last came a withering stare at a man who had been introduced to Jerome as Sergeant Luke Mahan of the Bartlette Sheriff's Department.

He beamed a smile back at her. "Abby, you know full well that I went to confession last month."

"Yeah," Abby shot back, "And from what I've been hearing you're past due to go back."

Everyone in the room, including Luke Mahan, broke out laughing. After a few seconds, Abby waved her hands to focus everyone again.

"I'm afraid that we've been having so much fun that we forgot Father Tolton's had a long day. So, in about five minutes I'm going to kick all of you out. However, in a final imposition on the good Father, I'm going to ask him to say a prayer for us, because surely some of us are in bad need of it." That came with another glance toward Luke Mahan and more chuckles around the room. As that died down she pointed to Jerome.

"In the name of the Father, the Son, and the Holy Spirit." Seeing that less than half the people around crossed themselves he continued in a more ecumenical vein. "Let us bow our head and pray together."

"Heavenly Father, we are told in Psalm 127 that it is fruitless to build a house without you and impossible to defend a civilization without you. Please be with us as we build our house with these good people and through that house a better land with you in our hearts. Let us not turn from the difficult tasks nor forget our duty to you. We ask this in the name of Our Lord Jesus Christ. Amen."

There was a chorus of "amens" and the crowd started breaking up. The only person who did not move was Brad Dollerby. As the crowd broke up Jerome saw the look that Brad had fastened on him from across the room. It was a hard, determined look that was not friendly. Finally, he saw a frown that bordered on belligerence cross the man's face before he shook his head and walked out of the room.

Author: Ken Lammers on 11/19/2012
Email ThisBlogThis!Share to TwitterShare to FacebookShare to Pinterest