"It is possible to eliminate cash 'bail' while at the same time increasing the number of persons detained before trial."

Does Bail Reform Increase Crime? An Empirical Assessment of the Public Safety Implications of Bail Reform in Cook County, Illinois

In fact, if you think it through, it's not only possible, it's a logical probability.

Bail reform comes in two flavors:  (1) Elimination of Bond (not bail), and  (2) Elimination of Holding People in Jail Prior to Trial. These are not necessarily consistent goals.

Bail with the imposition of a bond only really affects one of the two factors to be considered in deciding whether bail should be granted - whether the defendant will appear in court.1  The problem is that bail bondsmen have grown to be such a part of the system that while they are a necessary evil in some set of cases, the precautionary use of bond and its concomitant reliance on bondsmen has led to a system that either unnecessarily financially punishes many of the unconvicted or leaves them in jail.

With many, if not most, States and localities putting pre-trial services units in place, one of the potential or perhaps assumed uses of a bondsman has been superceded. Pre-trial services units take over the bondsman's job of keeping track of defendants prior to trial. This isn't a terribly important function of either because neither can actually stop a defendant from fleeing the jurisdiction and not stopping until he's six States away hiding out in Scottsbluff, Nebraska.

The other, and primary duty, of bondsmen is one the pre-trial services unit does not have: making a defendant come to court. Pre-trial units report to the judge if a defendant drops off the face of the earth; bondsmen send people to bring them back. They do this because if they don't, they are required to pay the court the entire amount of the bond of which the defendant has paid them only 10%.

Currently, at least in Virginia, the two systems overlap, but those pushing bail reform clearly want to eliminate the bond system entirely and momentum seems to be on their side. This would be a mistake. See my high-quality, professionally drawn illustration below. 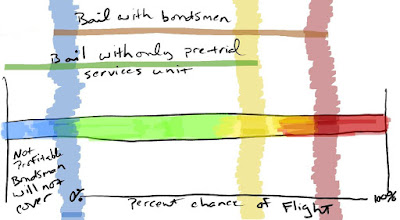 (1) I said professionally drawn. I didn't say drawn by a professional artist. My profession's the law and with artistic talent like that I think we all know why.

(2) The blue section is where bonds are so low that bondsmen can't make a profit covering them. If a bondsman covers $500 bonds for $50 each it only takes 1 bonded to disappear to eat all his gross profit on 10 people when the court requires him to pay the bond. And since most "bail recovery agents" (bounty hunters) get paid 10% of the bond, it isn't worth their while to spend a week or two hunting down a fugitive for a whole $50. There will be a level below which an economically sane bondsman will not cover a bond. This in turn can lead to a weird situation where a judge can keep a defendant in jail by setting a bond too low. A bondsman who might happily cover a $1,000 bond at a charge of 10% ($100) might never cover one that's less than $750. Thus, if the judge sets the bond at $400 and his family can only put together $250 then the defendant might sit in jail because the bond amount was too low for the bondsman but too high for the family.2  Needless to say, this really shouldn't happen, because if a judge is setting a bond that low she really should be letting the defendant out on bail without a bond. However, I've seen it a few times and I'd wager other criminal law attorneys have as well.

(3) Coming out of the blue, going through the green and somewhere into the yellow we have the people whom bail reform is supposed to help. These are the people who will tend to show up to court at whatever rate is acceptable to the judicial system generally and to the judge making bail decisions in particular. This is where a bondsman makes his money, but provides minimal service for the court; it's his profit center. Bail reform is meant shut this down. If defendant's in the green zone go from 99.999% to 97% likely to show up to court then they shouldn't have to pay someone to not be in jail.

Let's say the yellow zone goes from 96.99% to 70% likely to show for court. Somewhere in there is going to be a point at which the judge decides that no pre-trial services isn't going to be adequate to ensure the defendant returns to court. The exact place on the chart will vary from judge to judge and defendant to defendant, but most every judge I know is going to want something more than the defendant's word if he believes there is a three in ten chance that the defendant won't show for trial.

The orangeish part thru to its transition to red we'll say is 69.99% to 50% likely to show for trial. Somewhere in there the judge just is going to decide there's no way the defendant's getting a bond.

Between the yellow line and the red one is the zone where we need bondsmen. otherwise, as stated at the beginning of this post, more people should remain in detention. That's not to say that removing bond requirements for those to the left of the yellow line is bad. In fact, it's a definite good as long as we don't don't go off the rails with it and do away with bond period or set it so far out of reach (see New York's developing train wreck)3 that it accomplishes nothing.

It would be interesting to see what happened to the bond industry if the easy cash of those in the green zone disappeared. The business becomes much more marginal once it is actually limited to higher risk defendants. And yet, there should be enough sharp and competent bondsmen left to keep the system viable. It should shake out those who are in it for the lazy money and leave the ones who actively monitor, check on, and track their clients.

My suggestion would be a statute something like this:

A defendant shall be entitled to bail without bond unless the magistrate or judge finds one of the following:

If the defendant has been charged with a class 1 misdemeanor or a felony within six months prior to the act upon which his charge is based and the date of that act is within a month of the defendant's initial appearance before a magistrate or judge there shall be a rebuttable presumption that subsection (D) applies to the defendant.

1  The two factors are  (1) Likelihood of the defendant being a danger to himself or the community, and  (2) Likelihood that the defendant will appear for trial.  It is unlikely that posting a bond will affect violent propensity of the defendant toward herself or others; thus we shan't be discussing that prong of the test today.

2  All the numbers in the example are pulled out of thin air. This is not science and I am not an economist. If you want a painstaking study and analysis I suggest you find someone who knows how to do that and does it for a living. I am sketching out a general example in terms understandable to my limited brain and hopefully yours.

3  Actually, it is more fairly argued that the flaw in the NY reform is that it requires the release without bond of people whom the judge and everybody else is aware will go out and commit more crimes or harm people. It categorically requires release of all defendants who fall within a certain criminal set without any distinction at all between the members of that set. This does not fall under the fail to return to court prong of the bail test. It's a failure to rationally apply the danger to self or the community prong. It appears to be a (possibly much) magnified version of the failures of the Chicago bail reform.

Author: Ken Lammers on 3/09/2020
Email ThisBlogThis!Share to TwitterShare to FacebookShare to Pinterest