How to Make Sure an Emergency is Real 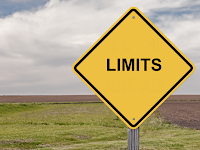 Governors need emergency powers betimes because actual emergencies happen. However, it's also an extreme danger to our rights and liberties. There needs to be a serious consequence to any governor who chooses this path and there aren't really. Anyone who's read my blog and seen some of my FB posts and comments knows I am skeptical of the various governors' accumulating power to themselves and their wielding it as a club rather than a rapier. They have to have these powers during emergencies; we shouldn't trust them with it.

When a governor declares an emergency or assumes emergency powers without a declaration, that governor shall be subject to the following limitations:

(1) Should the assumption of powers extend beyond 60 days, or 30 days if it is the second assumption in one year, the governor shall cede his office to the lieutenant governor and not be eligible to hold any elected office in or for this State for a period of five years.

(2) Should a third assumption of powers be made in one year, the governor will immediately cede his office to the lieutenant governor and not be eligible to hold any elected office in or for this State for five years.

(3) In no event shall an emergency extend beyond 90 days without the approval, by majority vote, of the State Senate.

(4) In no event shall an emergency extend beyond 120 days without the approval, by majority vote, of both houses of the State Legislature.

(5)  No time period herein shall be subject to any form of tolling and the date used for each declaration of emergency or assumption of powers shall be counted from the first day the emergency is declared or the powers are assumed, whichever is earlier.

(7)  A declaration of an emergency or assumption of emergency powers by any official in the executive branch shall be deemed to have been declared by the governor.

(8) Definitions -
(a) One Year: A 365 day period, starting backward from first day of the most recent declaration of emergency or assumption of powers.
(b) A Day: One 24 hour period starting at midnight and including any part thereof as if it were the whole.
(c) Assumption of Powers: Use of or reliance upon any of the powers listed as available to the governor in a declared state of emergency.

As always, I don't claim it's perfect, but if this or something very similar existed in my Commonwealth I'd be much more receptive to the executive orders my governor keeps popping out every two to three days.

Remember, when the press is in an uproar and the public is in a panic there will be tremendous pressure on any politician to act even if the best call is not to act at all. A statute such as that above provides a powerful disincentive to declare an emergency and would make those such as me much less wary.
Author: Ken Lammers on 3/30/2020
Email ThisBlogThis!Share to TwitterShare to FacebookShare to Pinterest