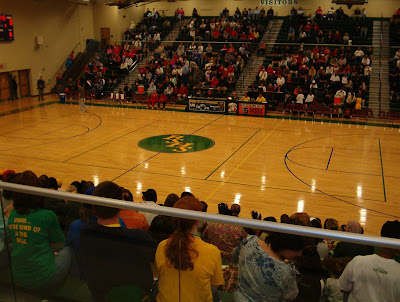 It's been a basketball filled weekend for yours truly, with the best part being the trip to Lexington to watch Bryan Station put a good old fashioned wuppin' on Scott County in the District Championship. Both the first and second place teams go on to the regionals, but the loser was going to be on the same side of the bracket as Lexington Catholic and, as the lady next to me cheerfully informed me "I don't want to have to beat both of them to get to the Sweet Sixteen." Lexington Catholic, Bryan Station, and Scott County are ranked 1, 2, 3 in Kentucky and only one team from the region goes to Kentucky's basketballfest (The Sweet Sixteen), the 16 team tournament for bragging rights in the Commonwealth.

If you are a Defender fan the second quarter was amazing, 2 back-to-back 3 pointers built Station's momentum and the Fort (what they're now calling the basketball auditorium) went nuts when #30, Terrell Combs (going to Minnesotta on a football scholarship), leapt ten feet into the air and smashed a Scott County shot into the stands. Then the Scott County coach got a T and finally, with time running out Station's big time star, Shelvin Mack (going to Baylor) hit a three. From then on the Defenders just kept pushing until they beat the Cardinals 94-75. Now on to the Regionals where just about everybody is ranked in the top 20. It should be a good tournament. Sadly, because apparently they wanted the regional championship to be poorly attended they scheduled it for a Tuesday night.

Sadly, the news for my Centre College Colonels wasn't quite so good. The SCAC tournament was this weekend and Centre breezed through the first couple games.

Before the tournament was over the SCAC named Thomas Britt the SCAC player of the year.

Unfortunately, in the championship game none of this did Centre any good. I'd like to say they were beaten by a superior Millsaps team, but I'd not be telling the truth. Centre played the worst I've seen them play this year. They were missing 3 pointers, free throws, and lay-ups (and lay-ups & lay-ups & lay-ups . . .); Centre only shot 20% in the first half. Millsaps won by 9 and it wasn't that close. Now Centre will probably get a Pool C bid to the NCAA tournament and I think this might scuttle Centre's hopes to host a round in the tournament (and my hopes to go watch a round).
Author: Ken Lammers on 3/02/2008
Email ThisBlogThis!Share to TwitterShare to FacebookShare to Pinterest