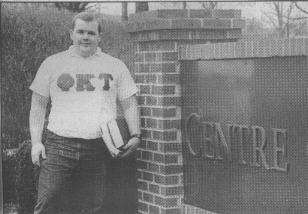 (in my best Thurston Howell the Third accent) Some of us just happened to have graduated from superior schools.

Centre, my beloved undergrad, has been ranked by Forbes as the 13th ranked college in the entire country.

Several relatively unknown schools do surprisingly well in our rankings. . . Centre College, a highly regarded liberal arts school in Danville, Ky., ranks 13th. . . Centre was in the top 10% of schools on all criteria.

Yep, always knew we were better than you Nancy-boys who went off to school at places like MIT, Chicago, or (shudder) Berkley.

Actually, comparing a school like Centre to a place like MIT isn't so much like comparing apples to oranges as comparing apples to '67 Studebakers. Same thing with comparing any schools to the various military academies. Still, Centre ranked 12th among private schools and beat out a lot of schools which are directly comparable (Sewanee: 67, Davidson: 93, Washington & Lee: 38, Depauw: 47, Colgate: 44). Of course Swarthmore is still king of the heap among these type of schools, but taking it and Amherst down are long term projects. ;-)

It's the first year for this ranking which means that schools haven't had an opportunity to game them yet. IMHO, this lends weight to the rankings. In the future the odds are that Centre's rank will drop, not because the school will become less amazing, but because other schools will throw gazillions of dollars and millions of man hours into skewing the results.

Anyway, at least for now, I get to look down my nose at most of you mere mortals. After all, who would you rather have impressed with your school, the folks who read US News or the gentlemen and ladies who read Forbes?

Now, if we can just have another basketball season like last year (unlikely, but I can hope).

BTW, read the comments in the Forbes article. They are filled with a lot of hilarious sour grapes which manage to say in so many subtle, not so subtle, and varied ways, "But you didn't rank my school high enough! Waaaaah!!!"
Author: Ken Lammers on 8/16/2008
Email ThisBlogThis!Share to TwitterShare to FacebookShare to Pinterest