The Continuing Saga of "Raising the Bar"

Well, it's been three weeks since the last time I wrote about "Raising the Bar" so I thought I'd address the issue which has bothered me the most so far about the series: the defendants.

The first defendant we saw was Calvin. Calvin is a stand-up guy who has been falsely accused of rape. While conflicted, he agrees to plead guilty, but the judge refuses the plea and forces him to go to trial.

The second defendant is George. He stabbed a guy 36 times and cut his penis off. He doesn't want to go to trial because he does not want himself or the victim to be called queers. Therefore, he agrees to be an informant.

This is Terrence. He is a sympathetic black kid who was manipulated by girl as a tool against her cheating boyfriend. Eventually, he ends up being harassed until he beats up the girl's boyfriend. 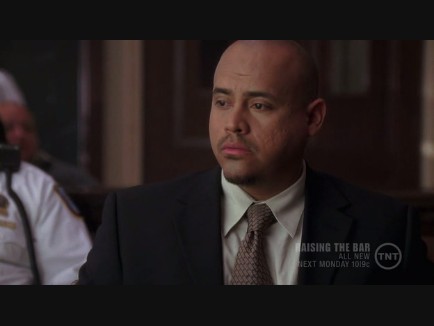 This is Mr. Rodriguez. I don't have any video of him because he didn't really have much of a part in the episode. He was just the defendant and the story was mostly about the prosecutor trying to hide a witness.

This is Will. He is a mentally disturbed, likable defendant who resists treatment for his condition.

This is Kia. She is a likable, headstrong, self righteous misdemeanor assaultor who violates a protective order and gets herself a felony in the process. She minimizes her guilt by downplaying her acts.

I never caught this guy's name. He is a family man who was going broke and killed a thief who was trying to steal the tools he needed to support his family.

This is Sabrina. She is being pressured to testify that she saw a murder which she did not see. The police charge her with a misdemeanor and take her children in order to pressure her.

This is Bruce. We don't see him too much. He raped a boy and is accused of having murdered him. In the couple of times we see him he talks about having nightmares and lokks guiltily at the parents of the boy.

This is Freddie. He is a family man who is taking his chance at spending 25 years in prison on a drug distribution charge because it's the only way he get out to see his wife and he can't inform on the person the police want him to because that man is caring for his family.

This is Stan. He parleys, with the willing participation of his wife, a domestic battery case into a violation of a protection order and battery of a police officer.

This is Sheran (Sean?). He is a father accused of trying to rob someone and is concerned that he be able to get back to his family.


I tell ya'll, after watching 6 episodes of this show I think I took up the practice of criminal law in the wrong State. The defendants are all nice, supportive, grateful, cooperative and basically friendly. They don't seem to have any of the people I asked about in my first review of Raising the Bar.

There are elements in many of the presented defendants which ring true (especially episode 3), but none of them are real trouble makers. Criminal law would be so much more pleasant if all the defendants were as nice as these folks. How come when I was a defense attorney a difficult client/family seemed to pop up at least once every 6 months? Was it just me? Are defendants in Virginia just naturally more cantankerous than defendants in New York?

David, how about a two episode story in which the defendant is a jailhouse lawyer who files a bar complaint as soon as the defense attorney is appointed (before the attorney even knows he's appointed)? The defense attorney has to fight that off (when the Bar requires a reply) and then go to trial representing this guy, who refuses to plead guilty because of irrelevant technicalities, is found guilty and handed a heavy sentence. Then, of course, the defendant files another unmerited Bar complaint which the attorney has to answer.

How about a Mom who pressures her on-bail son to go to trial despite the attorney's advice to continue the case and then catches the attorney in the hall (after her son gets 6 months in jail 2 weeks before Christmas), corners him, and reads him the riot act for ruining her youngest son's life? Her family's last chance at getting one son to adulthood without his life being ruined by going to jail.

Aaaaarrggg!!! I'm starting to get frustrated just remembering.
Author: Ken Lammers on 10/12/2008
Email ThisBlogThis!Share to TwitterShare to FacebookShare to Pinterest

In Colorado it seemed [all in the past tense since I am now retired] that it was becoming standard practice that when you represented a plaintiff in a civil matter the defendant would file a grievance. [most of my cases involved civil fraud and the defendants were thieves in suits who ripped off someone's life savings] The grievance committee would require you to respond, an investigation would ensue that would require you to furnish ever more and more information. Finally, after an exhaustive effort the complaint would be dismissed as without merit.

I always wondered why they couldn't see the lack of merit from the outset. Why in the middle of what would invariably be a difficult case they would make you go through all that with the defendant laughing and taunting you.

It's not the lawyer that is hurt in these matters. It is the client. What sort of a legal system allows itself to be used by one citizen to harass another citizen by crippling his lawyer with a bogus ethics complaint?

When I retired and moved to Wyoming I decided to take the Wyoming Bar. Why? I'm a masochist, I guess. [after passing the Wyo Bar I learned I may not have needed to take it, and that I may have misinterpreted the reciprocity provision. Oh well.] Anyway I passed and in the course of studying for it I learned that in Wyoming most ethics complaints that are filed in the middle of litigation are put on hold and not investigated until the litigation is concluded. Very serious allegations are, as one would expect, an exception. Wise policy, if you ask me.

I see too many similarities between this 12 episode show and a prior failed series, "Philly," which I happen to enjoy in reruns btw.

As we've seen before, Bochco likes to reuse actors from one series to the next. Mark-Paul Gosselaar and Currie Graham are the obvious ones from NYPD Blue. I just watched an episode of Philly that had Jonathan Scarfe in it who plays the conflicted gay law clerk, Charlie Sagansky in RTB.

Gosselaar's hair is just not believable for him, or his character on this show. It drives me nuts each time I look at that rag mop.