The 2009 Virginia Medical Examiner's report is online and these are the 5 counties with the highest percentage of drug deaths:

As you can see by the map that follows, most of these counties are in Southwest Virginia.

It could be argued that because of lower populations a few deaths in a county can skew the results by presenting a larger proportion of the population than many deaths in a larger population in a city such as Richmond. This is true and King and Queen County is probably on the list because of that. However, when the higher percentages of deaths due to overdoses cluster is is indicative of a wider problem. As well, if you go back through the reports from the years before 2009 you see that the higher percentages of drug deaths consistently occur in Appalachian areas. In fact, this is the third time Tazewell has been in the top five in 7 years. Here's a map of previous distribution of highest death rates by drugs. 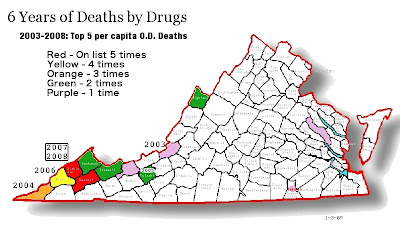 It's all part of the pill plague.
Author: Ken Lammers on 8/22/2011
Email ThisBlogThis!Share to TwitterShare to FacebookShare to Pinterest