Lock Down: Let's look at the Results


The most accurate method for measuring outbreak of COVID-19 is the number of deaths. It can still be inaccurate if some are missed or the there are deaths included which are "presumptive" or where a primary cause is ignored to blame the disease. However, it is better than almost any other. Tested positive is probably the worst because it depends on how many tests are available and how they are used (there will never be one test for all 327,000,000 of us).

I live within an hour of five States. Tennessee, got slammed for staying open longer and not coming down as hard on their citizens as other States. Kentucky has been the darling of those who think shutting everything down is the proper model. There was even bit of fluff that spiked in social media and some news sites comparing number of cases in Kentucky and Tennessee to make it look like Kentucky has done better.

Here's a chart of absolute case numbers (current as of 13 April):


Here's the chart by death rates in each State: 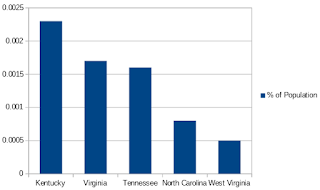 Are lock downs working?
Author: Ken Lammers on 4/14/2020
Email ThisBlogThis!Share to TwitterShare to FacebookShare to Pinterest

We can't replay this with changed variables, so we'll never be certain. And it does seem to me that lockdowns have not been as effective as they "should" have been - there are a few different things that make me think there's something we are misunderstanding about the virus.

But putting that aside, the charts of cell-phone movements seem to tell us that lockdown or no, people in southern states have resisted reducing interaction more than other states. My suspicion is that when we are through this, human movement will be the best indicator of spread.

And early lockdowns in California seem to have worked. I personally live in San Francisco (second-densest population center in the country); we were the first city in the country to do so. I started working from home the week before and know many other tech firms went remote around the same time. And a CA emergency was declared March 4th. We also have comparatively high rates of compliance, at least in the cities. Full timeline available here: https://calmatters.org/health/coronavirus/2020/04/gavin-newsom-coronavirus-updates-timeline/

So again, we can't control for a variable and see what happens. But it looks to me like what matters is a population of individuals who understand and act on the notion of greater good - if you don't have that, well, there's no 'lock' in the 'lockdown.'