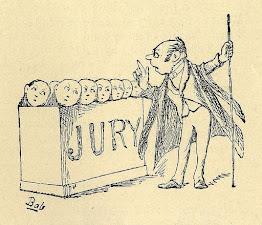 SB5007 - This statute would remove juries from sentencing in Virginia unless the defense asks for a jury sentencing. It is probably the most anti-democratic bill of the year, removing one of the best aspects of Virginia's jury system: local democratic participation in choosing a proper sentence reflective of community norms. And why is it being removed? It's a blatant attempt to shift power to defendants at the expense of the People.

The counterargument to this would be that jury sentencing is an impediment to the exercise of the jury right by defendants and often a threat usable by prosecutors because jurors are expected (in some cases required) to sentence higher than a judge and judges rarely reduce a jury sentence even though it is within their power (because a jury sentence is the will of the citizens). This is easily solvable. Have the advisory sentencing guidelines be published to the jury prior to their sentencing deliberations so they have the same parameters to start from as the judge would. Don't inform them of any mandatory sentence a judge could suspend and if they sentence lower than the mandatory have the judge impose the mandatory and suspend all but the jury's sentence. These two steps would make the jurors what they are intended to be, the voice of the citizenry in the courtroom.

The desire to get rid of jury sentencing is elitism writ large. Attorneys don't like it because it is unpredictable. Academic types hate it because it is reflective of the will of the local community rather than what is imposed as a one size fits all solution from outside. Defendants might get a heavy sentence for theft because the community despises theft despite it's relegation to almost a non-crime by legislation and sentencing guidelines. Prosecutors might get a light sentence for a drug distribution (particularly if the fix I suggest above was implemented) because the citizens don't see a problem with buprenorphine. Both sides should be forced to face sentencing juries and if I had my way they would whether the defendant pled guilty or not for all violent and sexual felonies. Trying to suppress it is a failure and anti-democratic.

It also appears that allowing jury sentencing only at the beck and call of the defendant is violative of Virginia's constitution. Jury sentencing has been a part of Virginia law since it abandoned death as the sole punishment for felonies in 1796. Our constitution lays out the situation in which a defendant can be sentenced by a judge:

In criminal cases, the accused may plead guilty. If the accused plead not guilty, he may, with his consent and the concurrence of the Commonwealth's Attorney and of the court entered of record, be tried by a smaller number of jurors, or waive a jury. In case of such waiver or plea of guilty, the court shall try the case. Art I sec. 8.

The court is authorized upon a plea of guilty to "try the case." The logical reading of "trying" at that time is the sentencing. This, read in conjunction with the history of Virginia jury trials having jury sentencing as long as the ability to be sentenced to something other than death has existed in Virginia, establishes a strong case that jury sentencing is part of any jury trial herein. Reading further into the language above, juries can only be waived by the defendant with the agreement of the Commonwealth and the judge. Nothing allows the defendant the right to pick and choose those parts of a jury trial she prefers to take place.

Text-to-speech function is limited to 200 characters
Author: Ken Lammers on 8/17/2020
Email ThisBlogThis!Share to TwitterShare to FacebookShare to Pinterest