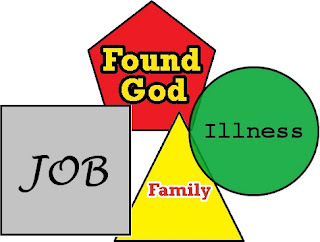 As you'll all recall, a couple years back I staked my claim to the Big 4 reasons that people can't possibly go to jail. By the way, several of you defense attorneys are behind on your payments for the use of my copyrighted/trademarked reasons. I'm sure it's just an oversight.

Anyway, I was talking to another attorney a few days back and he had, independently, developed a chart in which he measured the the probability that a defendant would develop a relationship with God or find a well paying job against the probability that he was going to jail.  He stated that there was an amazing correlation between between the two. I thought this was pretty cool and sat down to plot the Big 4 on the same sort of chart (as I see them where I practice; your mileage may vary).

Illness is an epidemic among those heading to jail.  It's both a reason why a person cannot go to jail and a reason why that person, if she must go to jail, can get occasional vacations (furloughs) from jail so that she can go to the doctor to deal with her problems (and visit home; and get a meal a McDonalds; etc.). Honestly, I think that a fair portion of these people actually have pre-existing medical conditions. However, I cannot help but notice that a rather large percentage were not going out of their way to deal with their medical issues prior to getting charged. In fact, it's amazing how many people have a doctor's appointment scheduled the day after they are scheduled to be sentenced by the judge and how that broken tooth the defendant has had for a year suddenly starts to throb terribly once she's in jail, becomes a health risk, and needs three dental appointment furloughs to fix.

Job is another way to try to stay out as well as a way to mitigate the actual sentence. An impressive number of people get jobs before they come to their sentencing hearing. A not insignificant number will tell the judge that they have a job waiting as soon as the uncertainty caused by this criminal sentencing is over. A smaller number will tell the judge they've got that job interview today or tomorrow for a job they're sure they'll get. The implication is that if the judge locks them up he will cause them to lose their jobs and ruin their and their family's lives. Of course, if the judge gives them jail time then they want work release. Mind you, work release isn't a terrible idea for someone who is not a repeat offender, is convicted of a minor offense, and has a decent job (not just fry-guy at the local Burger Grease Palace).  The problem with work release always turns out to be the guy who got a "job" working for his subcontractor uncle and just goes home every day to watch TV or the ones who think they are clever and slip off to *ahem* "meet" with boyfriend/girlfriend for 30 minutes when they are sure they won't be missed. I don't know how often these things actually happen; all I know is that I've been involved in cases where they happened often enough that these are the first two problems that pop into my mind when I think of work relief.

Family need is always there, but the defendant seems to become acutely aware of it when she is looking at a jail sentence. She didn't think of the family when stealing the TV from Mega~Mart or when she was dealing drugs in front of her kids, but she absolutely has to be there for them now. They cannot make it without her there to support and protect them. This is a mixed bag. Any prosecutor worth his salt is going to doubt the sincerity of the defendant. She has a history of not caring about her family and the way she's acting right now seems more like an attempt to leverage her family for her benefit. On the other hand, defense attorneys will be more likely to believe their clients' sincerity and become upset at the prosecutors' lack of compassion. Of course, caught in the middle of this is the family itself and the very real concern that, even if Jane Smith is 40% of the mother we wish she were, will we harm the children by depriving them of that 40%? In most cases, the family need is raised as an all or nothing issue. Either the defendant stays out to help her family or she goes to jail and the family is harmed. Sometimes, this is used in conjunction with the job attempt at palliation under the rationale that the defendant must continue to provide financial support to her family.

Finding God seems to tie in more often to when defendants are being held in the jail pretrial. Churches send people to the jail to spread the Good Word and with little else to do the defendant goes to services and Bible studies and classes on good Christian behavior and etc. Sometimes defendants come to the sentencing hearing with a stack of completion certificates a couple inches high. While there obviously some trying to manipulate the system, I think the majority of these are sincere. However, experience has also taught me that once these folks are back on the street and hanging around with their buddies on the outside they will fall back into their wicked ways. So, while I'm sure that a lot of us hope that there are true conversions that hold up under testing, I've not seen too many people get out of their sentences thru conversion. However, I've seen lots of pastors and deacons in court fighting for a member of the body as well as his soul.
Author: Ken Lammers on 1/11/2012
Email ThisBlogThis!Share to TwitterShare to FacebookShare to Pinterest

One of our Judges in______, Virginia Circuit Court, has been known to say "I have a solution for the unemployment problem in America. Give everyone a court date."