A Whole New Rule For Search - The Old Rule 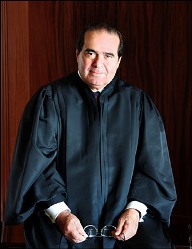 The BIG FUSS this week has been about United States v. Jones, JAN12, USSC 10-1259. I read about it first on my phone during a break in a jury trial I was prosecuting on Monday. The headline said pretty much what I've seen others say: The Supreme Court Requires Search Warrant for GPS Tracking of Vehicles.

Of course, this headline isn't exactly right (they never are). After my week slowed down a little, I finally got to read the Scalia opinion and I must say that I don't have a lot of heartburn with it.

Facts: A search warrant was gotten in the District of Columbia in order to put a GPS tracker on a car. The warrant ran out without the GPS tracker being placed on the car. Government agents, after the search warrant had lapsed went into Maryland and placed the GPS tracker on the car. The evidence gained from the tracker was used in the Defendant's trial. Government's Argument: There was no search because the defendant had no reasonable expectation of privacy as he drove his car on the street.

New Rule: There is now a two part test to determine whether an act by the government is a search (either makes it a search):

1: Is the act a trespass on the property of the suspect?

Note: Property in this case does not just mean land; it also means personal property such as cars, purses, briefcases, etc.

2. Does the act violate the suspect's reasonable expectation of privacy?

Exceptions: 2a: Those emanations which are readily noticeable by a person may not require a search warrant. For instance an officer that smells marijuana, or sees stolen property in a car or hears someone in a house yelling "Rape!" would not have to go get a search warrant.

2b: Emanations (scents) which are alerted to by a dog do not require a search warrant per Cabelles.

Note: Any information which can be retrieved about a person without trespass on his real or personal property should go through a reasonable expectation of privacy analysis. Emanations are just the most obvious. Others might be mail or billing or . . .

WHAT THIS CASE DID NOT DO: The Court specifically declined to address whether it was reasonable for government agents to place the gps tracker without a search warrant because the government did not argue this below. Thus there is no actual mandate for a search warrant to attach a gps tracker. However, common sense tells us that reality on the ground is that in the majority of cases a warrant should be obtained. If we ever get to the point that every officer is carrying trackers on his belt and can throw one on the back of a car escaping a bank robbery then it wouldn't be required, but short of that it is hard to picture a scenario in which officers don't preplan the use of a gps tracker so that a search warrant should be obtained.
Author: Ken Lammers on 1/26/2012
Email ThisBlogThis!Share to TwitterShare to FacebookShare to Pinterest

This is an old school ruling of the 4th Amendment. I don't have a lot of heartburn with it either. What bothers me is the lengths Scalia went to distinguish the beeper cases. He may be right about the facts of those cases involving property to which the defendants had not yet acquired a possessory interest, but these were not facts on which either of those cases turned at the time.

If the peg doesn't fit, I wish the Court would just overrule prior cases, rather than making out like the rest of us have been reading the law wrong all this time.