New Mexico: Punish the Owner Not the Dog Breed

The big fuss is over pit bulls (like it is everywhere else) but the reality doesn't track with the hype:

[German shepherds mixes] have been involved in 39 bite incidents, pit bulls are blamed for only 10. Dachshunds bit nine people in the same time period.

Up to a point, I agree with this. The last time I checked, we actually had a law on the books in Virginia that forbade State actors classifying a particular breed as dangerous. I'd look it up and provide a link, but apparently the General Assembly's Statute and Constitution pages are down.

However, I must say that I do see why you might possibly classify pit bulls and dachshunds differently. Little, nippy rat-dogs get away with a lot more biting precisely because they just don't cause the damage. This, of course, is why all dogs which weigh less than 25 pounds (fully grown) should be neutered and the all yapper species allowed to die out. For goodness sake people, if you want a pet that small get a cat or ferret or even a hedgehog.

In fact, we here at CrimLaw may end up lending our good offices to the founding of the anti-rat-dog league: 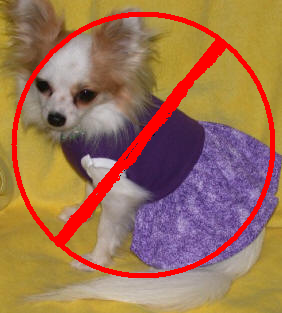 (Is it a little obvious that I'm tired of my upstairs neighbor's twin 5 lb. dogs barking at my 80 lb. Lab (Fred) and 40 lb. Golden Retriever/Chow (Spot) mix when I go to walk them? A couple weeks back we were both walking our dogs at the same time and the little monsters actually tried to charge my dogs. Fred ignored them, but I think Spot thought he was going to get a couple of new chew toys until I dragged him back. The poor guy walking those dogs for his girlfriend looked embarrassed as all get out to been seen with the yappers.)
Author: Ken Lammers on 7/27/2006
Email ThisBlogThis!Share to TwitterShare to FacebookShare to Pinterest

I don't agree with the 25lb limit though... My Betsy, a 20 lb beagle, is just about the best damn rabbit dog I've ever owned, and she definitely doesn't qualify with all the other little yippers.

Ever been close to a hedgehog? They stink like a fly trap and are full of vermin. At least in the wild.

Never said I wanted a hedgehog. Just a suggestion for those out there considering a rat-dog.

I guess we could make exceptions for . They do seem to have more of a purpose in life than most ankle biters.

The above should say exceptions for beagles.

Ken, I agree, a dog should be a DOG, one that goes "Woof", (that's pronounced with a deep voice).

I wonder how long it takes for women with these "pocketbook dogs" to lose interest in the pet?

Get a cat if you want something you can pick up, sit on your lap, etc.