The Pot Rebellion: News From the Front 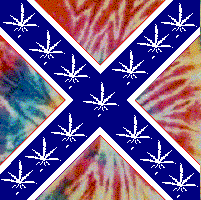 1) The Blue Coats look like they're about to get a feared, new general.

"California's pot shops have admittedly become an easy source of supply for people who just want to get high. According to 60 Minutes, the California law was originally intended to provide access only to the most needy, but in an attempt not to exclude any category of illness, it wound up with language so broad that it covers ever the vaguest complaint of pain. Now anyone with a note from their doctor can buy medical marijuana, and some doctors even advertise for patients in alternative papers.

One longtime supporter of medical marijuana, Methodist minister Scott Imler, says, 'It's just ridiculous ...The purpose of Proposition 215 was not to create a new industry.' Although the centers are supposedly collectives which buy marijuana grown by members and redistribute it, it is clear that large amounts of marijuana are also entering the system from the black market, putting money into the pockets of organized crime and terrorists."

4) If you have marijuana in your car, don't pull up and ask the officers to move theirs.
Author: Ken Lammers on 1/01/2008
Email ThisBlogThis!Share to TwitterShare to FacebookShare to Pinterest