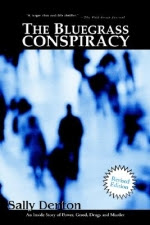 I rate The Bluegrass Conspiracy a 3.7.1 It's an intriguing look at a lot of things that were going wrong in the Commonwealth of Kentucky during the early days of large scale illegal drug importation in the 70's and 80's.

The book's anchor is a man named Ralph Ross, a Kentucky State Trooper involved in drug interdiction who was eventually thrown out of law enforcement and convicted for wiretapping. While Ross is just one of the primary characters in the book it is obvious that he is a major (if not the major) source of information and that the book strongly reflects his point of view.

The book implies a number of things without resolving the truth behind them. The Lexington, Kentucky police are strongly implied to be corrupt from the narcotics division all the way to the Chief of Police. Many of the criminals portrayed began their careers in the Lexington Narcotics Division. The book raises serious doubts about a Lexington Investigator John Bizzack; it never quite says he is corrupt and covering up crimes (including murder) for his former-police-now-criminal buddies, but it comes as close to the line as it can. BTW: Bizzack went on to be rather successful, publishing several police manuals and serving the last three governors as Commissioner of the Kentucky Department of Criminal Justice Training.

There is also an interwoven, but never proven, theme of CIA involvement. This is the only point where the author and Mr. Ross seem to part ways. More than once she writes dubiously about how Ross isn't buying the connection. Nevertheless, she lays out a number of questions as to how the Kentucky organization was able to thrive and why it took the feds so long to crack it (if they ever actually did).

The hook here is the involvement of Kentucky Blue-Bloods. It's made more interesting by strong ties between Kentucky criminals and Las Vegas Mob types (an interesting thing to consider now that the new Kentucky governor is trying to legalize casinos). Peripherally, there is also the destruction of Governor John Y Brown Jr.'s presidential aspirations as his good friends are taken down and he's never quite proven to be involved in anything.

I was growing up in Lexington during the time that all this was taking place. I remember my Father's abiding belief that Lexington and, by implication, all of Kentucky was extremely corrupt. I remember my Grandfather sitting on an investigative grand-jury until his death. Grandpa was a taciturn man, who took his duty not discuss the investigation seriously. However, word in the family was that he'd said something to Grandma to the effect of "They may not have broken any laws, but they're all dirty." So, I'm not terribly surprised to read any of this.

Still, reading this book was like entering a Bizzaro World Kentucky. Concerned that the book is one-sided, I went looking for critiques and counter-points. I didn't find much. Barnes & Noble and Amazon had the normal gushing reviews, with only one dissent in Amazon:

Though some people might find this book to be exciting and sexy and intriguing, please don't consider it as truth. This book should have been labeled as Fictional, which is what it is. Sally should have interviewed people who really knew the details-maybe spoken to members of the families involved, instead of spouting lies and touting them as truths. As a member of one of the families in the book, I know what I am talking about, and it hurts me deeply the lies that were told, which I can verify, matter of factly, were false.

And that's all I could find, even after doing separate searches on both Yahoo! and Google.

I did find one other thing that indicated the PD had been "cleaned up":

In 1990 . . . Walsh became Chief of Police. Walsh had never been involved in undercover work or narcotics investigations. He’d been a beat cop throughout his career, and was appointed Chief of Police to clean up the corruption within the department. After Walsh took office, many officers either retired or took jobs elsewhere, including David Shade and John Bizzack.

So, hopefully, any problems there were at LexPD have been squared away. Although, I wonder if the State Police are still exiled from Lexington.

5: Touched by God - a work which makes Shakespeare look infantile
4: Amazing - Instantly began rereading it and quoting it to friends
3: Worth Every Penny - a solid, interesting read, inspiring some thought and discussion with people who share similar interests
2: I Paid For It So I Finished Reading It - Some interesting parts but if I lose the book I'm not buying another copy
1: Couldn't Force My Way Thru and Burnt the Book in order to consign it to the Hell it deserves.
Author: Ken Lammers on 2/11/2008
Email ThisBlogThis!Share to TwitterShare to FacebookShare to Pinterest

Excellent book. I read it years ago, will have to revisit it. Books are especially interesting to me when they describe locations I've actually been. If I recall, some of the meetings amongst the "bad guys" in that book took place at "The Library." Good times...

This book is largely fiction - I should know, my father was the DEA SAC mentioned within it's pages.

The story about letting the DC-4 full of pot go un-hindered is absolute bullshit.

One of the engines on it had a blown oil pump so the co-pilot had to turn a manual oil pump crank constantly for the whole flight or the plane would have crashed.

All of the pot was recovered from the plane and burned by the DEA, under my father's supervision.

I should sue Sally Denton for defamation of character.

I will say this - there is much to be concerned about involving the activities on one Drew Thornton, he was always a shady character and it was kind of understood that he "worked" for the government.

Yes John Bizzack moved on up to become head of Kentucky's Criminal Justice Training program, donating money heavily to political candidates while noted also, as a country music song writer. His wife of 35 years died on the COMAIR plane crash at the Bluegrass Airport in 2006 where 49 south bound people perished.

He's been quite successful, even though implicated in much of the coverup documented in Ms. Denton's book. His family was connected through business to Leonard Lawson who just stood trial for a bid-rigging scandal in the Transportation Department, State of Kentucky.

Both Ralph Ross and Leonard Lawson used the same law firm. While Ross lost his wiretapping case, Lawson won with much protection from the judge (Forester) who gave directions to the press that Lawson would be sure to have a "fair trial." Forester also stated at the trial's onset that the whistleblower (Rummage) who had implicated Lawson was already discredited.

It goes on and on. and locally fearful folks say, "The same ones running the BGC then, are still running it. even today."

You cannot sue for defamation of character on someone else behalf Just because it was a family member gives you no authority , you have to sue for what happens to you not your family, also a book being written is for entertainment purposes and also ones own opinion , no one on the planet could prove that it was defamation because you would have to have the absolute truth and that can not happen at this point,also u have to prove harm in some way to have defamation case.

The Bluegrass Conspiracy is a great story told by a terrible writer. Denton made a great story very dull until the last quarter of the book. There are multiple grammatical errors, which should have been corrected in the revised version, that throw the reader off track. Denton refers to multiple characters by multiple names making continutiy impossible. I also feel there is too much background on some of the secondary characters. This book is worth reading if you can make it through all the boring, minute details. The Bluegrass Conspiracy is a great story Kentuckians will appriciate.

Sally Denton is a Liar. I am retired from the Evansville In Police Dept I have spent over 30 plus yers working on a gangland murder which occurred in my city on 10-18-1977. Denton in her book Blusgrass states Drew Thornton finger printwas recovered from the steering wheel and matched to Drew Thornton. I refuse to talk with her many years ago about her investigation and Mr.Ross. The information I had read supplied by the FBI/KSP paints a differnt picture of Ross,hence his arrest/conviction. We our task force at the time ATF,FBI,ISP,KSP ,EPD did alot of work one of the crazy leads was some discredited former cops from Lexigton police. Two officers even as i write this on 08022011from Lexington who I know from my contacts are very professional and since their retirment have continued to be leaders. I trust them with my life. Do Drexel Neal or John Bizzack mean any to you? It means a great deal in my investigation in searching for the truth,Sally Denton is very questionable from my view. Truly ,Steve Bagbey 2X679 retired Evansville In Police Dept.FBINA,BS

To Steve, You must be a recipient of some wonderful favors!

If it was so false why didn't someone sue? I have to assume because in a lawsuit you have discovery and there were a lot of people who didn't want that light shown apparently.

I know this is an old post but it sums the book up perfectly. I had to force myself to finish this book and the last 50 pages are where the story is.