Steve, who on the odd occasions blogs hereabouts, got an i-pod as a gift from his better half. I've never seriously thought of getting an i-pod or one of its competitors and I really didn't think about buying one when I saw Steve's. Then came yesterday. I was over by the mall and stopped in at Circuit City. I went in with the intention of buying a new digital camera because my old one is screwing up about half the pictures I take. However, the cameras I was interested in were all about $200 more than I was willing to spend.

As I am wont to do, I started wandering the store. After checking out TV's and computers I'm not going to be able to buy, I wandered past the MP3/hand-held video player section. I stopped to look and see all the gadgets and add-ons that I'm sure Steve has started buying for his i-pod. Still, I wasn't particularly interested in the Apple products.

What caught my eye was the $100 cheaper Creative Zen. For those of you who don't know, Creative has been trying hard to break Apple's near monopoly on MP3/video players. As the number two company often does, it has, IMHO, better products at cheaper prices. Creative's problem has been that it doesn't seem able to make its players as purty as them there i-pods. It also doesn't have the world's most successful distribution website exclusively for its product (i-tunes). Neither of these things matter to me all that much. The Creative Zen M is purty enough and I really don't need Apple to aggregate what I'm going to download to watch. So I got sucked in and bought one. 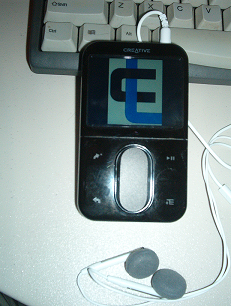 It's PC based, so it uses divx, xvid, and wmv instead of H264 and m4v. It's a little hinky on the videos. WMV loads fine, but divx and xvids have to actually end in .avi to load up. That's annoying since a lot of places just use .xvid and you have to change the name of the file. It also claims to use mpeg-4, but after trying for a while I looked on line and found out that there are actually 3 different versions of mpeg-4 and the one Creative supports ain't in use anymore. That's annoying because the mpeg-4 capability was a pretty big selling point to me.

Still, most of my videos are in PC formats and they work beautifully. I loaded Blogging Heads, TWIT 28, Command-N, and a couple other videos on the Zen. They're impressive and nary a problem in playing them. The sound is also very good.

I like my new toy; still, it is proof that I should never, ever be allowed in Circuit City without someone to grab me by the arm and drag me out when something shiny catches my eye. And I never would have looked at it if Steve hadn't shown me his new toy. So, it's all Steve's fault. I wonder if I can get him to pay half?
Author: Ken Lammers on 6/30/2006
Email ThisBlogThis!Share to TwitterShare to FacebookShare to Pinterest

I plead "No Contest" to the charge. I deny the allegations and I resent the alligator!

On a side note- I got a totally cool BATMAN vinyl protective cover for my video ipod!