Here is the prescription drug I see most abused: 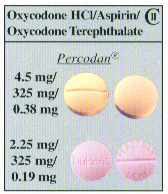 However, this is the one I find people most desperate to get:

[Usually heroin addicts who are trying to get methadone so they won't use heroin.]

And this is the one which anecdotal evidence suggests is the most pernicious:

[Triazolam has multiple stories told about it of strange behavior. Unexplained violent behavior, including murders, after use of this sleeping pill has led to a ban in some European countries.]
Author: Ken Lammers on 1/15/2005
Email ThisBlogThis!Share to TwitterShare to FacebookShare to Pinterest

I paid $25 for some tabs shaped like Barney Rubble--what do they do?

Deprive you of money.
.

sound's kind of fake to me, possibly some kind of MDMA but sounds doubtful

it will keep you in good healt. its a flintsons vitmeine

the methodone with 71 on the back is a 5 right

how can you tell someone is useing it?

Hey i was just wanting to know how much is 260 ng/ml to mg of methadone?

i have some pills that are white and no markings...Is it possible for them to be methadone or whatever. I need to identify this pill

Hey Barney, Did you ever think they were chid vitamins?? http://www.astaris.com/mm/images/Flintstone-vitamins.gif


Check out the link I think i found your problem